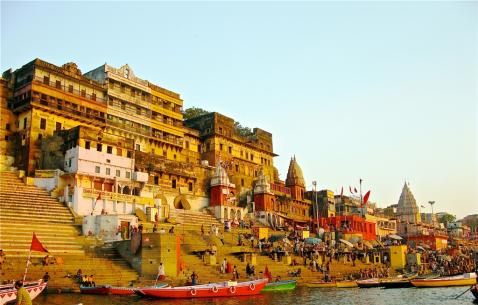 Steady yourself. You're about to enter one of the most strikingly colourful, inexorably chaotic place on earth. It’s a magical place, but it's not for the faint-hearted. It may turn out to be your favourite spot to visit. And you will come back for more! It’s a road trip favourite.

Varanasi also known as, Benares, is an Indian city on the banks of the Ganga in Uttar Pradesh. It is the holiest of the seven sacred cities in Hinduism, and Jainism, and played an important role in the development of Buddhism. It is one of the oldest continuously inhabited cities in the world. Varanasi is also known as the favourite city of the Hindu deity Lord Shiva.

The Maharaja of Kashi is the chief cultural patron of Varanasi, and an essential part of all religious celebrations. The culture of Varanasi is closely associated with the Ganges. The city has been a cultural centre of North India for several thousand years. It has a history that is older than most of the major world religions. The Benares Gharana form of Hindustani classical music was developed in Varanasi. Many prominent Indian philosophers, poets, writers, and musicians live or have lived in Varanasi. Gautama Buddha gave his first sermon at Sarnath, located near Varanasi. Pilgrims come to the Ghats lining the River Ganges here to wash away a lifetime of sins. This is done by taking a dip in the sacred waters or to cremate their loved ones. It's a particularly auspicious place to die, since expiring here offers moksha. Moksha is liberation from the cycle of birth and death. This makes Varanasi the beating heart of the Hindu universe.

Most visitors are NOT on casual vacation or weekend getaway. Varanasi is the spiritual capital of India. This holy and religious city attracts thousands of pilgrims every year. It is also the city of learning and scholarly books have been written about Varanasi. The current temples and religious institutions in the city are dated to the 18th century. One of the largest residential universities of Asia, the Banaras Hindu University (BHU), is located here.

There is a labyrinth of alleys called galis that are too narrow for traffic. They can be disorienting, but the popular hotels and restaurants are found there. However lost you become, you will eventually end up at a ghat and get your bearings. Most places of interest, and much of the accommodation, are in the old city.

Essential travel information and Varanasi tips for your visit

Plan Your Trip To Varanasi

The best tours and activities in the city, guided by experts to give you a local insight to the best of Varanasi