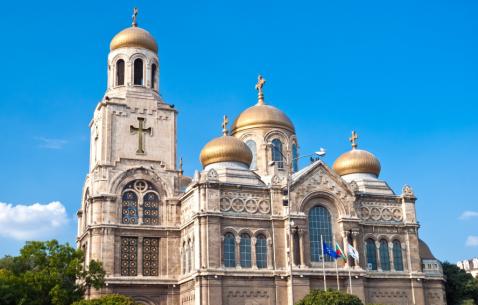 Varna is the maritime capital and third largest city of Bulgaria. It is home to around 365,000 people. Varna has an interesting distinction: the oldest treasure made of gold was found in the Varna Necropolis and it consists of artefacts dating back to 4750 BC. Over 30 prehistoric settlements have been found in the region dating back to 100,000 years ago. The region has been populated by Thracians and Greeks at one point or the other in its history and later became a part of the Byzantine Empire. It was also a part of the Ottoman Empire for four centuries. After a long time of being exchanged between significant powers during the course of its history, Varna became a part of Bulgaria. The city played a significant role in the First Balkan War and the First World War. It is now one of Bulgaria’s most important economic hubs.

Its ideal location has made Varna one of the most significant tourism destinations in Bulgaria. The city is also Bulgaria’s only international cruise destination. It is among Bulgaria’s fastest growing and best performing cities. In 2007 and 2008, it was voted ‘best city in Bulgaria to live in’ and once you visit this Bulgarian gem, you’ll know why.

Varna is an interesting mix of old world charm and modernism, with its neo-renaissance and neo-baroque buildings standing shoulder to shoulder with elegant apartments and exquisite beachfront property. Your itinerary planner should consider this city because of its beautiful attractions such as the famous Sea Garden and the archaic Aladzha Monastery. For a fascinating, history-rich vacation, head to Varna. It won’t disappoint.

Essential travel information and Varna tips for your visit

Plan Your Trip To Varna

The best tours and activities in the city, guided by experts to give you a local insight to the best of Varna