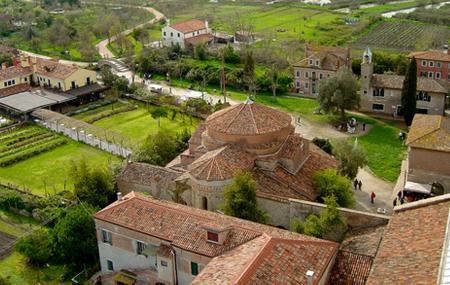 Oh man. Torcello’s story is tragic. The island boomed in the centuries after Attila the Hun devastated the Roman Empire. The urban refugees of those wars made their home here, and thanks to the salt marshlands, quickly formed terrifically powerful city – more so than Venice! The Byzantine Empire symbolically adopted the island, but it was too far away to really interfere in its workings. The good fortune didn’t last. The salt marshes became just marshes. Malaria became rampant. 12th century onwards, the population dwindled, and there are just about 20 people here today. Torcello’s legacy of ancient palaces, parishes, and cloisters is lost.

We have the Cathedral of Santa Maria Assunta, from 639, which is a classic Venetian-Byzantine structure. Be sure to check out the façade and portico. Some of Venice’s earliest mosaics are contained within, including a beautiful Standing Virgin. The skull of Saint Cecilia is also kept inside.

The 11th century church of Santa Fosca (free entrance) is near the Cathedral.

Also nearby is a small Museum of Torcello. The museum courtyard has a stone seat called Attila’s Throne. Divided into a Medieval/Modern Section and an Archaeological Section, the Museum’s collections reflect the history of the Venetian Lagoon, and include also many relics right from the Palaeolithic era to the late-Roman period. The displays highlight Torcello’s relationship with Venice, Altino and Byzantine.

Mini-attractions include the Devil’s Bridge.

If you’re staying overnight at the island, the Torcello Casa d'Artista Lucio Andrich will arrange lodgings, dinner, and a boat tour of the island for you.

Also, visit nearby attractions which are covered in Venice itinerary 5 days.

How to Reach Torcello Island

Love this? Explore the entire list of places to visit in Venice before you plan your trip.

Fancy a good night's sleep after a tiring day? Check out where to stay in Venice and book an accommodation of your choice.

84.44% of people prefer walking in order to reach Torcello Island

People normally club together Burano and Castello while planning their visit to Torcello Island.