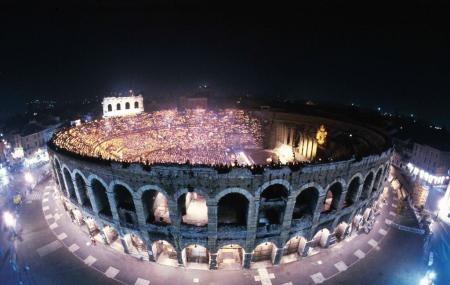 This massive arena was built in AD 30 and could host about 30000 spectators at that time. The arena was used for a number of sports events and viewers used to come from far off places.

Built out of white and pink limestone from Valpolicella the façade was a marvellous structure. However, destroyed in a major earthquake in 1117; it still remained an attractive sight for visitors in the medieval times.

During the Renaissance the arena was first used for theatrical performances. Later on with the rise of Italian opera, and the initiative of Giovani Zenatello the operatic performancescommenced on a regular basis. Giuseppe Verdi's Aida was staged in the 20th century to mark birth of Verdi.

Presently during June-august about 4-6 performances are scheduled. Tickets for the same are available both online and at the sight itself. The arena can now house about 15000 people (for security reasons) and witnesses a footfall of 500000 people every year. Some of the operas conducted here are: Giuseppe Di Stefano, Maria Callas, Tito Gobbi and Renata Tebaldi. Adding to the beauty of the performances none of them have used a microphone or any other electronic device till 2011!

For all you Bollywood fans out there, the blockbuster film Rockstar starring Ranbir Kapoor and directed by Imtiaz Ali has opening and closing scenes from the Arena itself with beautiful music composed by AR Rahman.

How to Reach Arena Di Verona

Love this? Explore the entire list of places to visit in Verona before you plan your trip.

Fancy a good night's sleep after a tiring day? Check out where to stay in Verona and book an accommodation of your choice.

69.84% of people prefer to travel by car while visiting Arena Di Verona