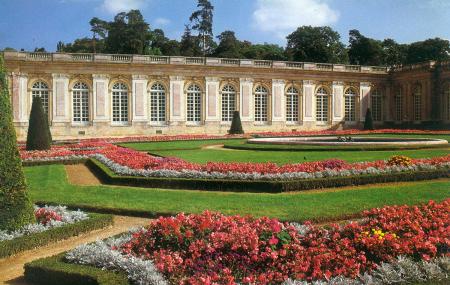 The Grand Trianon is considered to be the most beautiful of all the buildings in Versaille. The pavilion here was first made of porcelain (1670), which upon deterioration was changed to marble(1708). It’s second form was a favourite residence of the French king and his secret wife, and over the years it hosted other royalty too – the Grand Dauphin, the Duchess of Burgundy, the Dowager Duchess of Orleans and member of her family, the Duchess of Bourbon, Peter the Great and of course, Louis XVI and Marie-Antoinette. Heck, Even Napoleon and his wife stayed here for a bit. It was within these halls that the Treaty of Trianon was signed in 1920, and Hungary left with less than a third it’s land from pre-WWI.

It’s one of the greatest examples of French Baroque architecture in the world, but visitors are also deeply struck by it’s geometric French Gardens.

How to Reach The Grand Trianon

Love this? Explore the entire list of places to visit in Versailles before you plan your trip.

Fancy a good night's sleep after a tiring day? Check out where to stay in Versailles and book an accommodation of your choice.

94.09% of people prefer to travel by car while visiting The Grand Trianon

People normally club together Eglise Notre Dame and Hameau De La Reine while planning their visit to The Grand Trianon.