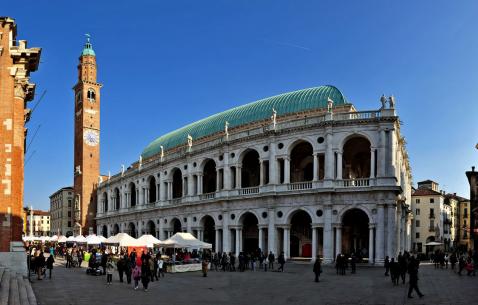 Located in the Veneto region in the Northeast if Italy, Vicenza is a city known for its rich history and architecture. This metropolitan city has more than 115,927 inhabitants.

The history of this ancient city dates back to the 157 BCE when it was a part of Roman Empire as Vicetia/ Vincentia. A century after Hungarians destroyed it in 899, it served as a seat of Bishop in 1001. Later in 1404, it became a part of the republic of Venice. In 19th century, the city was taken over by the Austrians, after the fall of Napoleon. But it finally became free and a part of Italy in 1866.

Vicenza is known for its architectural excellence due to the magnificent villas and palaces built by Andrea Palladio. These works of Palladio gained Vicenza a place in the list of UNESCO world Heritage sites as the city of Palladio.

With many other monumental constructions apart from Palladio’s works, this well-engineered city has become a well-acclaimed tourist spot where people celebrate its historical and cultural superiority.

Essential travel information and Vicenza tips for your visit

Plan Your Trip To Vicenza

The best tours and activities in the city, guided by experts to give you a local insight to the best of Vicenza