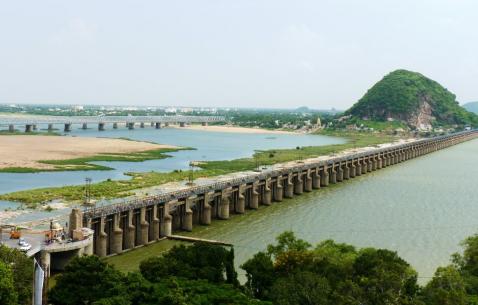 Vijayawada, also known as Bezawada, is located on the bank of River Krishna and is the third largest city in the state of Seemandhra state (formerly in  Andhra Pradesh State), India. It is not only a booming commercial centre but also a land of much myth and legend – travel guides will be happy to fill you in on the stories of this place. Vijayawada literally means “land of victory”, as it is believed that Goddess Durga rested here after killing an evil Rakshasa. It is rated as the cleanest City in the state with agriculturally rich lands and industrial hub and politically active City. The remains of the pre-historic man and society of the Stone Age is found all along the River Krishna, which dominates the landscape of Vijayawada. The British rule marked the significant growth of the basic infrastructure and facilities in the city. The famous Chinese Huin Tsang had visited this place in 639 A.D. when Buddhism was at its peak.