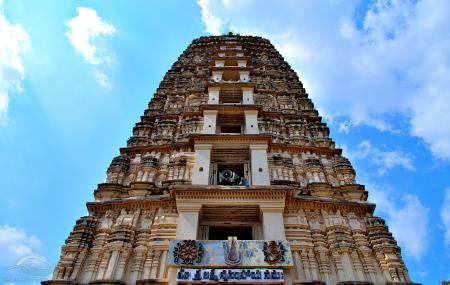 Mangalagiri means ‘the auspicious hill’. From historical sources we know that the region around the Mangalagiri hills was ruled by many rulers among whom the most important dynasty was the Satavahanas.

This is considered among the 8 auspicious places on which Lord Vishnu is said to have manifested himself. The other places being- Sri Rangam, Sri Musham, Pushkaram, salagamadri, Thothadri, Narayanasramam. The Mangalagiri was anciently known as Venkatatadri which formed the 8th auspicious place. It is also said that Goddess Lakshmi had meditated on this hill.

There are many mythological tales surrounding this hill. Here Lord Vishnu is in the Narasimha or the Half man – half lion avatar which he converted into to kill Hiranyakashyapa, the demon father of his great devotee Prahlad. It is also said that on this hill the demon Kamuchi meditated and got a boon from Lord Brahma that he would never be killed by anything wet or dry. Taking advantage of the boon the demon started harassing all the gods in heaven. One day, Lord Indra with his elephant came in front of the cave and started destroying the army of Namuchi. After many prayers Lord Vishnu himself came down and dipped his Sudarshana disc in the foam of the sea and sent it to cut the demons throat. Then he himself appeared in the Narsimha Avatar and killed Namuchi with the fire coming out from his breath. Thus the lord here is since called Sudarshan Narasimha. Even after that he did not calm down and after lot of appeasement he said that he will only cool down after drinking nectar. He said that he will be pleased with ghee in Thretayugam, milk in Dwaparayugam and panakam or jiggery water in the Kaliyugam. Hence, at present in the Kaliyugam he is called the Panakala Lakshmi Narasimhaswamy.

Thus, this is one of the main places to visit on your trip to Vijayawada.

How to Reach Mangalagiri

Love this? Explore the entire list of places to visit in Vijayawada before you plan your trip.

Fancy a good night's sleep after a tiring day? Check out where to stay in Vijayawada and book an accommodation of your choice.

92.96% of people prefer to travel by car while visiting Mangalagiri

People normally club together Kanaka Durga Temple and Undavalli Caves while planning their visit to Mangalagiri.