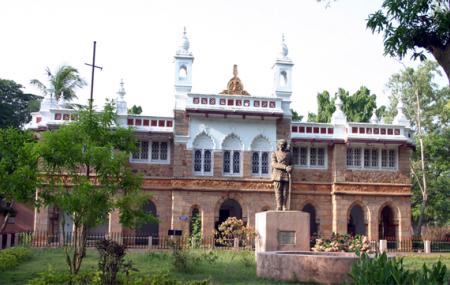 This museum is also known as The Victoria Jubilee Museum. It is located on the Bandar Road in Vijayawada City. It is one of the finest example of an Indo – European style building. The foundation stone was laid down by Robert Sewell, the then collector of Krishna District on 27th June, 1887. This was to mark the Golden Jubilee celebrations of the coronation of England’s Queen Victoria. Back at that time, this museum was a house of industrial exhibits only. After a few years the authority of the museum passed into the hands of the Nuzivid Zamindars of Krishna District. Much later, in the year 1962 the museum was taken over by the Department of Archeology & Museums of Andhra Pradesh Government.

In 1921, the All India Congress met here for a conference. On the special day, Sree Pingali Venkayya of Mungala Samsthana presented Mahatma Gandhi with our tricolor in the presence of many other famous people such as Motilal Nehru, Jawaharlal Nehru, Vallabhbhai Patel, Lala Lajpat Rai, Babu Rajendra Prasad, Tanguthuri Prakasham Pantulu and many others. Gandhiji added the wheel symbol to the flag which was then the symbol flag of the Indian National Congress and later after independence has been the national flag of India.

How to Reach Victoria Museum

Love this? Explore the entire list of places to visit in Vijayawada before you plan your trip.

Fancy a good night's sleep after a tiring day? Check out where to stay in Vijayawada and book an accommodation of your choice.