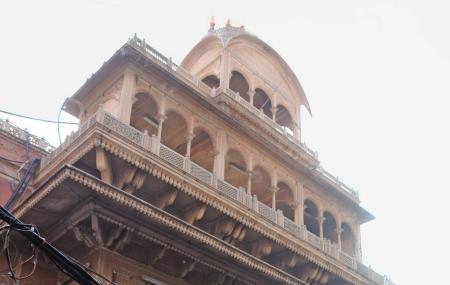 One of the most renowned temples dedicated to Lord Krishna, is the Banke Bihari Temple. The idol of the deity is known as Thakur Ji, and the body is almost black in colour. The deity is taken care of like a child and thus all the rituals here are done like those for a child. Thus, there is no early morning aarti and no loud temple bells and conches here, unlike those in most temples in Vrindavan. According to belief, the idol of the deity evokes such devotion inside a devotee, that the priests keep the idol behind a curtain to stop that from happening. The curtain is removed from time to time, and only for a short period of time. The temple is decorated like a dream during the festival of Janmashtami.

How to Reach Banke Bihari Temple

Love this? Explore the entire list of places to visit in Vrindavan before you plan your trip.

Fancy a good night's sleep after a tiring day? Check out where to stay in Vrindavan and book an accommodation of your choice.