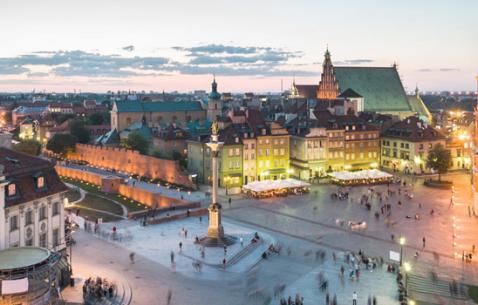 Even though Poland has been quite a favorite of Jeffrey Archer in terms of tragic setting and background of a lot of character establishments, the city has a lot more to it today. The World War II left most of the areas,regions and neighborhoods and most of its cultural heritage in ruins. Despite this, the city and its people’s spirits have persevered. Its monuments, buildings, parks and streets have been painstakingly and lovingly restored to their former glory. Now, apart from the memorial and the museums that recognise this painful past, there’s barely any sign that the city ever suffered. Warsaw is more enchanting than ever.

It’s most important attractions, like most places in Europe, pay tribute to its history. What sets it apart is how recent that history is. The most important event in the city’s history was the Warsaw Uprising, which though it failed, was a success in being the only demonstrably effective military resistance to German oppression in all of Europe during WWII. There’s the Warsaw Ghetto Memorial, the Memorial Museum and the much restored Nowy Swiat.Slowly becoming an important trade center, there is something in this city for everyone at all times. Just as you feel you have absorbed enough history with your visits to all kinds of museums is when you will realize that the city would rise again after hours and involve you into its mystic nightlife.

There’s much to appreciate apart from this. Tourists will love the parks, the unique non-westernized cuisine, the milk bars and the huge variety of coffee. The city’s subtlety lends it a unique and relaxed romantic environment. Although it’s true that much of this elegant city’s mystery and majesty comes from it’s tragic past in the last century but most of these incidents are now existent only in records and have a considerable amount of space in people’s memories. But today, you must visit to explore this wonderful city and it is sure to make a permanent place in your memory! Each one of you should visit Warsaw at least once and experience all that it has to offer considering the best time to visit Warsaw.

Essential travel information and Warsaw tips for your visit