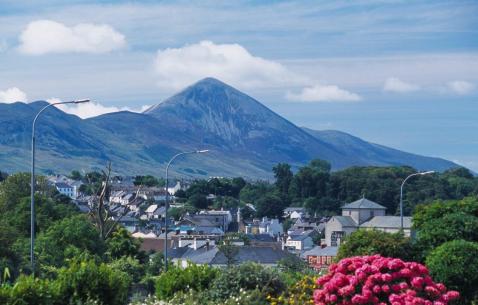 Westport is located to the south-east of Clew Bay in Ireland. Westport-known as ‘Cathair na Mart’in Irish means "stone fort of the beeves". The town’s layout was designed by James Wyatt in the late 1800s with Georgian architectural influences. The original town was situated to the west of its present location.

Westport’s layout belongs to the urban designs introduced by the Normans in the 13th century. The incorporation of the River Carrow within the town is one of the features which distinguishes the town’s layout from any other place in Ireland.

Interestingly enough, the town was also home to the infamous pirate chief Grace O’Malley during the 16th century.

Westport is known for its historic attractions. The famous pilgrimage of the Croagh Patrick lies almost 10 kilometres west of the town and is known for its summit where St. Patrick fasted for 40 days in 441 AD.

Traditionally, Westport inhabitants were known as ‘Coveys’- referring to the covey dialect which was exclusive to the town some decades ago. Calling Westport habitants ‘coveys’ today,however, is not preferred.

The 21st century Westport is vibrant with vivid distinction shown in its architecture, culture, lifestyle and beliefs. Today, the town has an active sport pulse and is best known for maintaining an old-world charm that somehow merges seamlessly with the changing times.

Tourists travelling to Westport will love the town for its sheer amiable vibe, history and popular annual festivals.

Essential travel information and Westport tips for your visit

Plan Your Trip To Westport

The best tours and activities in the city, guided by experts to give you a local insight to the best of Westport