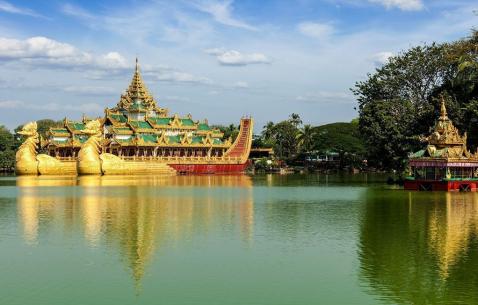 A withdrawn capital of the country, Yangon is to Myanmar what NYC is to USA. A charming, bubbling, bustling city; Yangon entices with its amalgamation of the old and the new. The impressive skyline of the downtown, the sanity-filled Buddhist temples and the plethora of 5 million residents make it an interesting place to visit.

If you walk on the streets of the city, there’s one thing you will be overwhelmed with- the blend of the cultures that have influenced the city. The Indian, British, Chinese and Burmese cultures have imparted their respective shades to Yangon making it a multi-hued city.

The modern-day city is believed to be originated from the time of the Shwedagon Pagoda. Originally called as ‘Dagon’ that is recorded to be in existence since 6th century, it is said to be renamed to ‘Yangon’ meaning ‘end of strife’ by Shwebo based King Alaungpaya after capturing it from Mongols in the 18th century. Gaining importance during the Second Burmese War in the mid-nineteenth century, the British named the city ‘Rangoon’ and the city saw a consistent growth since then.

Although fading today, the city’s architecture is a classic example of British Colonial era. The city has had a traumatic past with multiple invasions right from Mongols, British colonization, Japanese incursion and this is reflected in the secluded, Longyi-clad locals that are warm but not very friendly in their first acquaintance. But once you befriend them, you’ll be welcomed with their simplicity and kind behaviour.

Exploring Yangon begins with walking around its cobbled streets, experiencing the sanity of its Pagodas and treating yourself to the local cuisine bursting with flavours from fresh ingredients! Plan a trip to Yangon, marvel at its culture and heritage and get lost in its rustic, earthy and exotic appeal; because the more you do, the more in love with the city you’ll be!

Essential travel information and Yangon tips for your visit

Plan Your Trip To Yangon

The best tours and activities in the city, guided by experts to give you a local insight to the best of Yangon