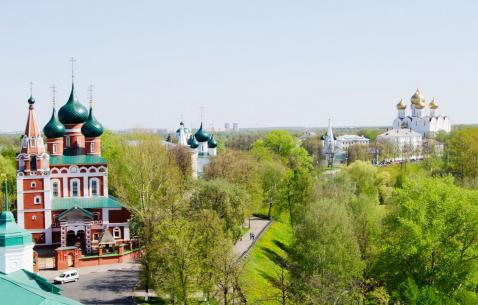 If you love to travel to cities with a different story to tell- a history which is unmatched to other cities or simply are fascinated by the Golden Ring of Russia, the signature Onion DomesChurches and its rich culture, then add Yaroslavl to your itinerary the next time you travel.

One of the oldest city located along the Volga river, 250 kilometers North-East of Moscow, Yaroslavl derived its name from its founder and ruler KievanRusYaroslavl- the Wise. The city has an immense history which dates back to 1010 when the ruler founded the city based on its strategic placement on the Volga banks. The earliest archaeological findings here have been of Scandinavian- Slavic civilizations including weapons, tools and chess pieces- to name a few!

During the 13th and 14th century, the city was majorly built from wood and all the repairs were attributed to the plague and the Golden Horde attacks. However, 16th century marked the use of stone construction- making repairs to the older wooden structures. Hence, even though many of the attractions in the city, even if older, are the modified version of the original.

Over the next few centuries, Yaroslavl became anindustrial spot in Russia- making textiles synonym with its existence and soon the old city, even though affected by Russian Civil War and World War II, maintained its old-world charm and exuberant history.

The 21st century Yaroslavl is as much a walk in history as a modern tourist must-see! The cityis one of the 8 cities of Russia’s Golden Ring and the city center is a UNESCO World Heritage Center- adding more charm to its global tourism.

Explore the city’s rich history as you see a different facet of what we know to be Russia.

Essential travel information and Yaroslavl Oblast tips for your visit