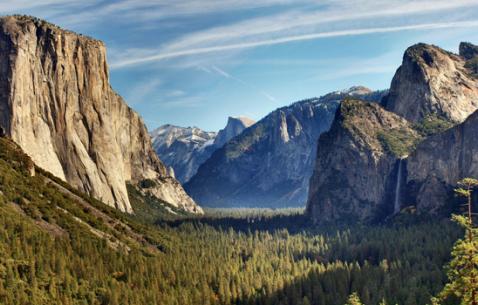 Removed, rugged and ravishingly beautiful, the Yosemite National Park is both a US National Historic Park and a UNESCO World Heritage Site. Magnificent and imposing granite cliffs, incredibly diverse flora and fauna, mystical waterfalls, giant trees, and miles and miles of beautiful hike trails – this is USA’s version of Avatar’s Pandemonium. The idea of preserving this park began quite early, in the mid-19th century to address the need for supporting a large amount of flora and fauna in the Sierra Nevada region, and today the park welcomes 4 million visitors annually. Geologically, this place is young – only 10 million years old. Ice ages in the subsequent periods sculpted the valley with massive, slow-moving glaciers.

Visitors ought to note that weather in Yosemite National Park varies greatly with elevation and can change dramatically in a very short period of time. Still, the park is incredibly accessible – most of its sites can be accessed by either foot, shuttle or even bicycles. During winters you can even ski. Camping and lodging at the park is possible if proper permission is taken from the authorities.

The best tours and activities in the city, guided by experts to give you a local insight to the best of Yosemite National Park