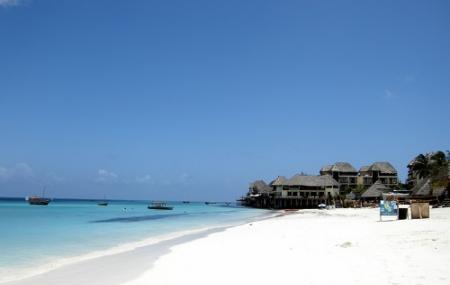 Situated on the northern tip of Zanzibar island, Nungwi is a calm and peaceful seaside village with its own beach. One of the reasons why it is calm is also because most of the tourists visiting here can be found underwater. Nungwi is a major scuba-diving and snorkelling centre in Zanzibar. Enthusiasts recommend the night dives offered by many diving centers. These dives give you a chance to see many exotic underwater creatures. If underwater is not your thing, you can visit the Mnarani Aquarium near the lighthouse. It is a natural pond near the sea and rears tiny turtles till they are strong enough to be released in the sea. You should also catch the sight of fishing boats leaving the beach at sunset to go deep seas fishing. Another leisurely activity on the beach is the 2-hour sunset cruise to Kendwa. If you hire the whole dhow, it becomes a private cruise and you can stop wherever you feel is picturesque.

How to Reach Nungwi Beach

Love this? Explore the entire list of places to visit in Zanzibar before you plan your trip.

Fancy a good night's sleep after a tiring day? Check out where to stay in Zanzibar and book an accommodation of your choice.

People also prefer to end their day with Nungwi Beach.