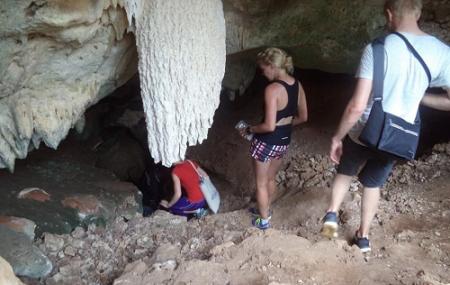 Tazari caves are the largest limestone caves in Zanzibar. They are located right off the coast in Nugwi and offer magnificent views of the sea from some caves. Although they were discovered quite recently, archaeologists say that the caves have existed for billions of years. Evidence points out that they were used as hiding places for slaves. Some evidences also suggest that people lived in the caves long before they were used by the merchants. These artefacts make up a natural museum of primitive civilisation in Zanzibar. The stretch of beach near these caves are good spots for picnics.

How to Reach Tazari Caves

Love this? Explore the entire list of places to visit in Zanzibar before you plan your trip.

Fancy a good night's sleep after a tiring day? Check out where to stay in Zanzibar and book an accommodation of your choice.

92.3% of people prefer to travel by car while visiting Tazari Caves

People normally club together Kendwa Beach and Nungwi Beach while planning their visit to Tazari Caves.