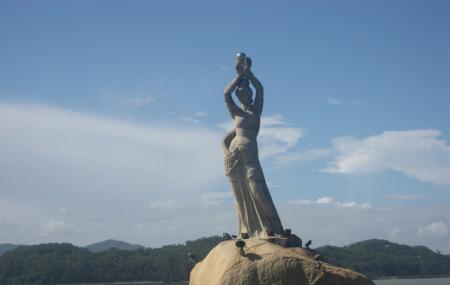 This statue is beautiful and serves as the emblem of the city. It is a nice walk around the shore and this is when you reach the statue bottom where the most common activity is clicking pictures with the sensuous statue which still guards the city and its people.

The legend behind this statue says that once upon a time, the beauty of this city which was then a village attracted an angel to come and visit it and did not want to return back as she had fallen in love with the place. She instead turned herself into a fisher girl and started weaving nets and searching for pearls to earn a living. During the course she is said to have healed many a sick villager and was thus adored by everyone.

There also lived a fisherman named HaiPeng and they both fell in love. Soon after, he was disappointed on hearing complaints about his beloved and thus challenged her to prove her love for him by giving him the 8 bracelets which adorned her arms. At this she became upset and refused to do so as she said she was the daughter of the Dragon King and the bracelets were given to her by the 8 mistresses of the sea kingdom. She said she would be dead even if she removed one of them.

Her lover left her in disbelief and she out of grief started removing the bracelets to prove her love and the moment she did it, she was no more. HaiPeng was left in deep remorse. He then went to the elder Jiu Zhou Huan who sent him to the Jiu Zhou Island to bring the magical reed that had to be grown with human blood and then applied on the angel to bring her back to life. HaiPeng shed his own blood for years and at last brought his love back to life and they got married. On the day of the wedding, people found a large pearl lying on the sea bed and this was then gifted to the elder. It is the same pearl that the statue still holds up.

How to Reach Statue Of Fisher Girl

Love this? Explore the entire list of places to visit in Zhuhai before you plan your trip.

Fancy a good night's sleep after a tiring day? Check out where to stay in Zhuhai and book an accommodation of your choice.

54.49% of people prefer walking in order to reach Statue Of Fisher Girl

People normally club together Mt. Shijing Park and The New Yuan Ming Palace while planning their visit to Statue Of Fisher Girl.