Évora Cartuxa: The Most Exclusive Tour For Wine Lovers - Setúbal

Évora Cartuxa: The Most Exclusive Tour For Wine Lovers - Setúbal 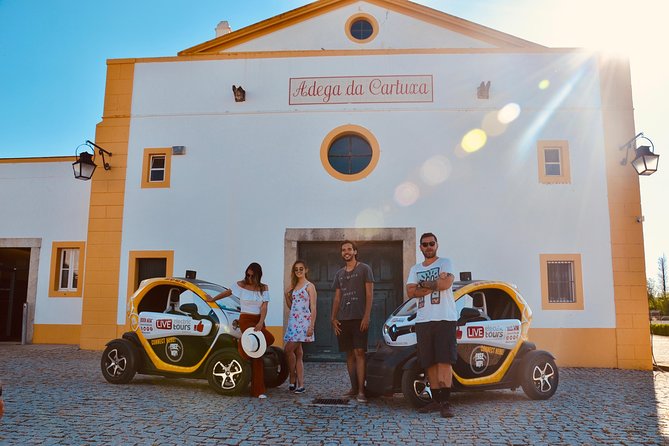 One of the most exclusive tours in vora! While for others it takes weeks to have a guided visit to the Cartuxa winery, this private and exclusive tour will take you there just some hours after your reservation, combining the charm of the capital of Alentejo, vora, with its famous delicacies: wine and olive oil.

You can also visit the rich estate of Eugnio de Almeida Foundation and see the grapes that make some of the best wines in the world in this 6-hour self-driving experience on board of a 100% electric vehicle: the Renault Twizy!

Adventure yourself on a 6-hour tour to Cartuxa Winery, have lunch at Enoteca and visit Monte dos Pinheiros where the grapes of Pera Manca are grown!

Stay connected with our free wi-fi, create your unique wine tour and share your experience in real time with your friends and family, courtesy of our live camera technology.

If you consider yourself a wine lover this is the experience you must have!

Itinerary
This is a typical itinerary for this product
Stop At: Enoturismo Cartuxa, Estrada da Soeira Quinta de Valbom, Evora 7000-769 Portugal
The Cartuxa Winery, located in the Quinta do Valbom. Founded by Ignacius of Loyola later Saint Ignacius in 1540, the Order of Jesuits was devoted to missionary and educational work. It was to those ends that Jesuits came to vora, firstly to set up the College of the Holy spirit (Colgio Espirito Santo) around 1551, and later, in 1559, to create the University of vora. A Jesuit rector of the University, Father Pedro Silva, acquired Quinta de Valbom in 1580 to house the universitys teaching body. The building of what came to be called the Jesuit Retreat (Casa de Repouso dos Jesuitas) took 10 years to complete, and resulted in a large, many-roomed building, complete with refectory and chapel.
In 1759, the Jesuits were expelled from Portugal by Prime Minister Pombal, and the Valbom Estate was taken over by the State. In 1776 it was equipped with a wine press which quickly gained importance in the region.
Situated on the Herdade de Pinheiros estate, can take all the grapes grown in Foundation vineyards and is fitted with three technological innovations that set it apart from the rest. These are: efficient refrigeration capacity; facility to sort the grapes on arrival at the winery and the ability to move musts and wine around by force of gravity.
The bottling line is fully automated and has an output of some four million bottles per year. These are red, rose and white wines of brands, Vinea, EA, Foral de vora, Cartuxa, Scala Coeli and the legendary Pra-Manca.

Duration: 1 hour 30 minutes
Stop At: Eugnio de Almeida Foundation, Pteo de So Miguel, 7001-901 vora, Portugal
The Eugnio de Almeida Foundation is a privately-owned charity, based in the city of vora. Its statutary aims are cultural, educational, social and spiritual, focussed on enhancing human achievement and overall development of the region of vora. Bequeathed by Vasco Maria Eugnio de Almeida, its statutes date 12 August, 1963, and were published on 10 October of the same year.
Continuing the regions age-old connection with wine, the Foundation has a longstanding history of winegrowing. Vines have been grown at the Casa Agricola Eugenio de Almeida since the end of the 19th century.

Duration: 1 hour 30 minutes
Stop At: Pateo de Sao Miguel, Mario Chico broad, Evora 7000-802 Portugal
Located in central Evora, Pateo de So Miguel has a big symbolic status. Along the centuries, this place was shaped by consecutive military invasions and was the scenario of remarkable events in the countrys and citys history. In the middle ages it was a fulcral defensive point in the city. After the city was con-quered to the Muslims, in 1165, the fortification was delivered by the King D. Afonso Henriques to the Military Order of So Bento de Calatrava.
Duration: 30 minutes
Stop At: Jardim das Casas Pintadas, Rua de Vasco da Gama, Evora 7000-941 Portugal
Painted Houses owes its name to the singular set of 16th century frescoes that decorate the gallery and the oratory annex integrated into the garden.
At the time of the execution of the frescoes, Painted Houses belonged to D. Francisco da Silveira, 3rd Coudel-mor of D. Manuel I and D. Joo III and a refe-rence poet in the General Songbook.
At the end of the 16th century, the Painted Houses were annexed to the Palace of the Inquisition to house the judges of the Holy Office.
The garden gallery decorations are one of the most interesting artistic manifestations of the genre existing in Portugal and a unique example of palatial mural painting from the first half of the 16th century.

Duration: 30 minutes
Stop At: Enoteca Cartuxa, R. de Vasco da Gama n15, 7001-901 vora, Portugal
Located in the heart of the historic centre of vora, Enoteca Cartuxa is the la-test addition to the Eugnio de Almeida Foundation legacy. Its white-washed walls with red-painted wood furniture is a traditional Alentejo tavern design with a contemporary twist.
Revel in the delights of Cartuxa wines, also available by the glass, and the rich, local cuisine.
Our olive oil range, EA, lamos and Cartuxa, is also available at the store.
Cartuxa Enoteca attracts both local visitors, as well as those coming from afar to enjoy this world-heritage city.