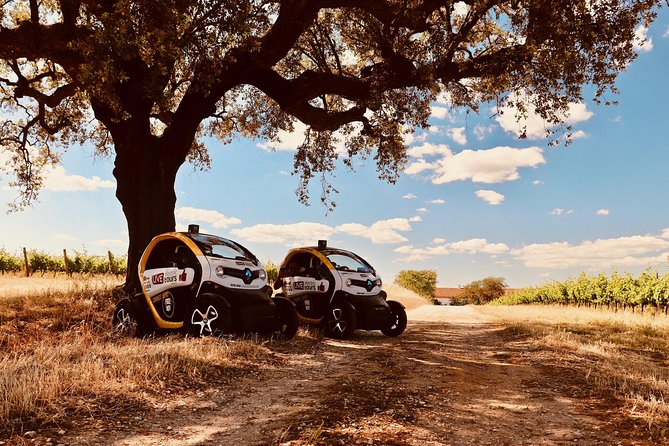 Everyone knows Stonehenge but did you know that vora has the stone circle of Almendres Cromlech? Built around 8000 years ago, this is a memorable place to visit and this city tour will take you there and to visit much more!

Drive through nature in an eco-friendly vehicle and discover this wonderful prehistoric monuments built before the wheel was invented!

This is the experience for you: adventure yourself on a 3-hour tour along vora rural landscape filled with cork oak trees and remember, you are in control of this unique 3-hour self-driving experience on board of a 100% electric vehicle: the Renault Twizy!

Stay connected with our free wi-fi, create your unique road trip and share your experience in real time with your friends and family, courtesy of our live camera technology!

Book now to discover our ancestors mysteries and all the mysticism that surrouds Megalhitic Evora.

Itinerary
This is a typical itinerary for this product
Stop At: Menir do Monte dos Almendres (Evora), Evora Portugal
The Alentejo region contains numerous Neolithic stone formations and the finest is the Almendres Cromlech. The 95 standing stones of the Almendres Cromlech form two large stone circles and were once part of a ceremonial site dedicated to a celestial religion.
The entire monument was constructed over a very long period, with the first stones laid in 6,000b.c., and was in continual use until 3,000b.c.
The Almendres Menhir is single standing stone near Evora in Portugal dating from 5000-4000 b.c. Standing about 4 meters high, it has some faint markings near the top. It is aligned with the nearby Almendres Cromlech roughly towards the sunrise on the winter solstice. Local legend has it that the menhir is the tomb of an enchanted Moorish princess, who can be seen combing her hair once each year on the eve of So Joo.
Duration: 1 hour
Stop At: Anta Grande do Zambujeiro (Evora), Rua Nossa Senhora da Visitacao, Evora 7005-566 Portugal
The Anta Grande do Zambujeiro (Great Dolmen of Zambujeiro) dates from 4000-3500 b.c. and it is the largest dolmen in Europe.
The dolmen is located in a peaceful setting among olive and cork trees. The main chamber - measuring 8 meters high and 6 meters in diameter - is formed by eight standing stones leaning inward. Leading to the chamber is a 12-meter-long approach corridor made of smaller standing stones.
The capstone has been removed by archaeologists and the artifacts found here (pieces of pottery, flint tools, beads and other items) are on display at the Museu de Evora.

Duration: 20 minutes
Stop At: Castelo do Giraldo, Nossa Senhora de Guadalupe, Evora 7000 Portugal
The site in Nossa Senhora da Tourega e Nossa Senhora de Guadalupe has been continuously occupied between 3000 b.c. and 1000 a.d. It was founded on a castro fortified proto-historic structure, with its origin in the Bronze Age, Chalcolithic, with vestiges from older settlements.
During the Middle Ages it was sporadically re-occupied and reconstructed.
Records from the 15th century indicate that the castle was associated with Giraldo Sem Pavor (Fearless Giraldo), the portuguese warrior who conquered vora from the Muslims in 1165.

Duration: 20 minutes
Stop At: Villa Romana de Nossa Senhora do Tourega (Evora), Evora 7005 Portugal
The Roman Villa of Tourega is situated in the lovely small village of Nossa Se-nhora da Tourega, in the voras historic department, in the heart of the vast Alentejo region.
This is a region of ancient human occupancy, with several important megalithic monuments in the environs, and here was situated an important Roman Villa, with a wide thermal complex, occupied since the 1st century right until the end of the 4th century after Christ era.
This Villa was situated in the much important Roman territory of Ebora Liberali-tas Julia (vora region), by the road to Salacia (Alccer do Sal) and belonged to influent people of that time.
In the 4th century the villa occupied an area of about 500 m2, with double Public baths, for both men and women, with rooms and tanks for cold and warm baths. Nowadays there are three bath tanks visible, with a rectangular plant, the larger one with 24,5 metres long over 4,6 meters width.