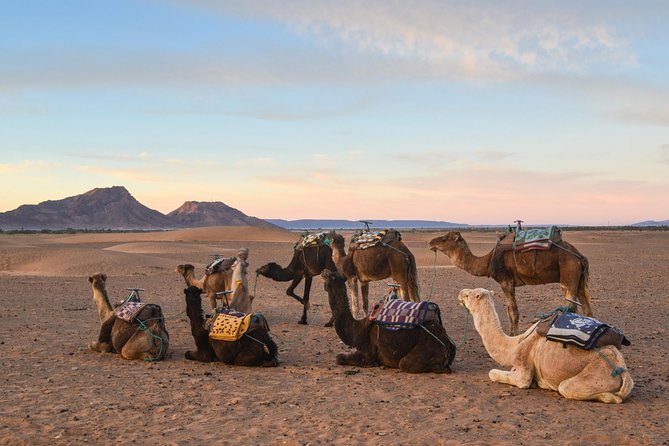 2 days to Zagora, an amazing trip to the Draa Valley to discover the treasures of southern Morocco.

DAY 01
One of the most interesting ways to discover spectacular insights into the kingdom known as Morocco , starting from Marrakech crossing the impressive high atlas with its different colors red , green , yellow and brown mountains , fortified villages inhabited by berber population who have maintained intact their customs and traditions through time, via Tizi n Tichka pass 2260 meters high meaning the hard pass. Trespassing close to some interesting salt mines andcontinuation to the Kasbah Ait Ben Haddou a wonderful 11th century, fortified village perched on high and a real architectural, a jewel built of beaten earth , it becomes one of UNESCO's world heritage sites in December of 1987, the visit takes 45 minutes , and then our tour heads to Zagora via Ouarzazate crossing the valley of Draa which is considered one of the loveliest areas in morocco also known as the Draa valley, earth-built settlements located around the oasis in particular , once weget to Zagora, we drive south to the village of Tamgrout a real gateway to the desert , this small settlement is surrounded by a lush palm grove and many mosques with roofs of blue-green tiles are evidence of its historic, and contemporary ,religious role , in the 17th century , after this historic village we return back to Zagora, where we will leave our vehicle to ride the camels which will take us to the camp .

DAY 02
After sunrise pictures you can have your breakfast early in the morning, then we will take our camels again, when the camel ride is over we will drive back to Marrakech through Ouarzazate where we can visit the cinema studios that served as a decor for many famous movies for example , the Mummy , the Mummy Returns , the Last Temptation of The Christ... Of course you have all the time to take pictures .

End of the tour in Marrakech.

Meals as per itinerary (B=breakfast, D=dinner)