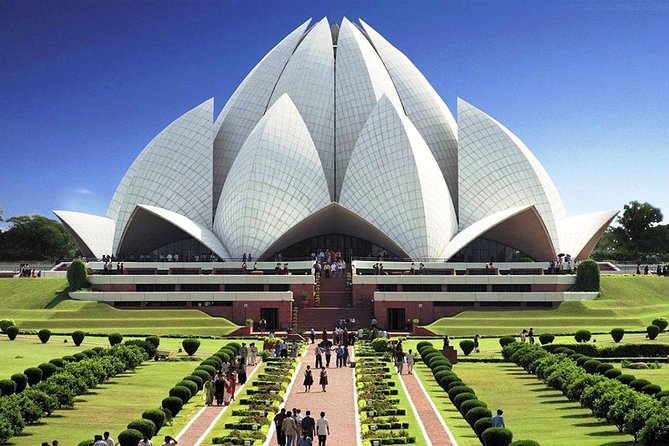 QUTUB MINAR:The minar (tower) was built in the year 1212 A.D and stands at a height of 72.5 mtrs in the courtyard of the Quwwat-ul-Islam masjid. This is the oldest historical monument in Delhi and is a must for any visitor to this city.

LOTUS TEMPLE:It is the Baha'I house of worship and a fairly recent construction, and is largely admired for its architecture.

RAJGHAT:The memorial built for Mahatma Gandhi who was assassinated by a fanatic, and cremated on the banks of the river Yamuna on 31 st January 1948.

INDIA GATE:Originally known as the All India War Memorial, built in the memory of the 90,000 Indian soldiers killed in the First World War, is a free standing arch with a height of 42.5 mtrs, designed and built by Edwin Lutyens in 1931.

BIRLA TEMPLE:Commonly known as Lakshmi Narayan Temple is a famous Hindu temple, constructed in the year 1938 by Raja Baldev Das Birla and it was inaugurated by Mahatama Gandhi. Located in the heart of Delhi the shrine is dedicated to Godess Lakshmi and Lord Vishnu.

INDIRA MUSEUM:This museum was the former residence of Indira Gandhi at 1 Safdarjang Rd. It displays some of her personal effects, including the sari she was wearing at the time of her assassination. A crystal plaque in the garden, flanked constantly by two soldiers, protects a few brown spots of Mrs Gandhi's blood on the spot where she actually fell after being shot by two of her bodyguards in December 1984.

NEHRU MUSEUM (TEEN MURTI):It was built as the residence of the British Commander in chief in India and later became the official residence of Shri Jawaharlal Nehru, the first Prime Minister of an independent India

AKSHARDHAM TEMPLE:The new Akshardham is the best hindu monument in Delhi which can inspired lots of people to our ancient religion.

JAMA MASJID:Is the biggest masjid in India , built by Shahjahan in 1650 A.D

RED FORT:Built by Shahjahan in the year 1639, the fort was a mini city where about 3000 people lived.

PARLIAMENT HOUSE:This is a huge circular, colonnaded builds where the Indian parliament meets.

Hotel pickup and drop-off (Any hotels in Delhi)

Subject to favorable weather conditions. If cancelled due to poor weather, you will be given the option of an alternative date or full refund