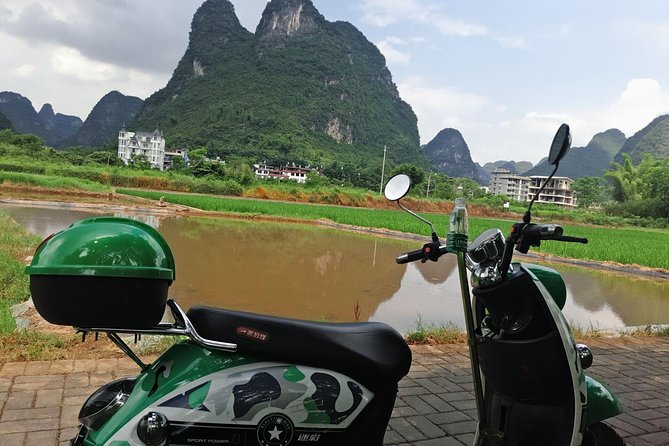 Take a cruise(3 star boat) along the Li River and enjoy the stunning and picturesque scenery along the way on this full-day tour from Guilin. Then, ride scooter/moped through paddy field and orchards surrounding the mountains, and get a fascinating insight into life in rural China.
During this tour, you can:
1.Enjoy a relaxing and picturesque cruise along the Li River on this full-day tour from Guilin
2.Ride scooter/moped and take a wonderful tour through the beautiful Yangshuo countryside.
3. Has more than 7 options Yangshuo tours for you after the Li-River cruise tour.

Itinerary
This is a typical itinerary for this product
Stop At: Li River, East of Guangxi Zhuang China
Begin your day early in the morning as we pick you up at your hotel lobby at 8:00am and take you to the Mopan hill Pier. From there, embark on your Li River cruise trip from Guilin to Yangshuo on our comfortable boat.
Relax on the boat and take in the majestic scenery of the Li River. Glide along the water, with the hills and the rugged nature around you on all sides. Enjoy the picturesque landscape, dip your toes into the crystal clear water, see the buffalos swimming or eating water weed in the river, and the fisherman drawing the nets.
Along the banks of the river, admire beautiful peaks, bamboo and rice fields, and quiet rural villages. Upon arrival in Yangshuo town, take a short rest before we get starting on our countryside cycling tour.
Ride scooter/moped around the Yangshuo countryside is one activity that is simply not to be missed during your time in Yangshuo. It's the best way for you to relax and enjoy the fantastic views without spending a whole day hiking and walking along the footpaths. This is a perfect tour for any travellers eager to explore as much of this beautiful region as possible!
Itinerary:
08:00: Pick up from the hotel in Guilin to the Zhujiang pier
09:30-14:00: On the boat and enjoy the beautiful landscape of Li river and Lunch on board
14:30-15:00: Arrive in Yangshuo town and short rest in West street.
15:00-17:00: Ride scooter/moped aroundYangshuo Countryside - enjoy the Yangshuo scenery
17:00: Back to your hotel from Yangshuo or drop off your hotel in Yangshuo
Duration: 4 hours
Pass By: Yangti Dyke, Yangti Country, Yangshuo County 541904 China
Yangdi Village is located on the west bank of the Li River, about 50km (31 miles) from Guilin, and 40km (25 miles) north of Yangshuo County. Behind the village lies a hill consisting of twin peaks, which look like two sheep hoofs hanging upside down. Hence the village gets its name Yangdi, which has a harmonic tone with 'Yangti', the Chinese expression for 'sheep hoofs'.
Pass By: Jiuma Mountain , Xingping Town, Yangshuo County 541906 China
Mural Hill(Jiuma Mountain), also known as Nine Horses Fresco Hill, is an attraction you can never miss if you visit Li River. It is located on the west bank of Li River, about 60 km (37 miles) from Guilin and close to Xingping Town. Facing the broad and peaceful watercourse is a large and steep stone cliff which looks like a huge painted screen. Backed by mountains and consisting of five peaks, Mural Hill is an assemblage of weathered rocks in yellow, white, black, grey and green colors. Looking from a distance the mottled cliff face resembles a huge piece of mural with images of nine horses in various poses.
Pass By: Xianggong Mountain, Xingping Town, Yangshuo County 541906 China
In the beginning, Xianggong Mountain was merely an obscure small karst hill on the west bank of Li River in Yangshuo County of Guilin. A few years ago, a local photographer took some pictures on the top of this mountain and won the bronze prize in an international photography contest, making Xianggong Mountain famous overnight. From then on, it became a popular tourist destination beloved by enthusiastic photographers.
Pass By: Xingping Town, Guilin 541906 China
Once, in ancient times, Xingping Town was the largest town along the Li River, and is 63 km (39 miles) from Guilin and 25 km (15.5 miles) from Yangshuo, on the east bank of the river. The town is really a beautiful place, surrounded by enthralling scenery. Both Mural Hill and Yellow Cloth Shoal belong to this scenic area.
Pass By: Xingping Fishing Village, Xingping Town, Yangshuo County 541906 China
Lying on the east bank of the Li River upstream from Yangshuo, the fishing village has a history dating back more than 500 years. Founded during the Ming Dynasty in 1506, this picturesque village is infused with typical Lingnan or southeastern Chinese provincial culture.
There are 48 traditional residences that have been remarkably well preserved throughout the years. Special features of these residences include blue brickwork, black tiles, sloping roofs, horse head walls, cornices and carved windows. The houses are classic examples of Ming (1368-1644) and Qing (1644-1911) dynastic architecture.
Stop At: West Street, East Side of Li River, Yangshuo County 541900 China
After the river cruise, we will visit the Yangshuo West street for 30 minutes.
West Street is the oldest street in Yangshuo with a history of more than 1,400 years. Situated at the center of Yangshuo County, the street has become, since the 1980's, a window of eastern and western culture and the biggest 'foreign language center' in China. It is the most prosperous district in Yangshuo, and, each year, approximately 100,000 foreigners come here on their travels or to attend advanced studies. Visitors are attracted to West Street by its unique mix of cultures.
The West Street is 517 meters (1,696 feet) long and 8 meters (26 feet) wide, meandering in an 'S' along its length. Being completely paved with marble it is a typical example of a southern China street. It is greatly admired by foreigners for its simple style and courtyard-like setting. There is a saying about it that 'half is village while the other half is stores'.

Duration: 30 minutes
Pass By: Yangshuo Park, West of Yangshuo Town, Yangshuo County 541900 China
Yangshuo Park is located in Yangshuo, covering an area of 230 thousand sq m (271 thousand sq yd). The park has both a big and a small gates. They are carved with the parks name in Chinese by famous calligraphers. There are plenty of osmanthus trees and bamboos in the park, providing a peaceful and secluded environment for visitors. Double Moon Stream runs through the park and the park is surrounded by marvelous mountains. Many locals do exercise and play Chinese chess in the park.
Stop At: Yulong River, Yangshuo, Yangshuo County China
Yulong River, also called Little Li River, rises in Lingui County in Yangshuo. The river is about 43 kilometers (26 miles) long, with a drainage area of approximately 158 square kilometers (39,043 acres). The part of the river that stretches from Yulong Bridge in Baisha Town, to Gongnong Bridge near Big Banyan Tree along the Ten-Mile Gallery, is known as the Yulong River Scenic Area, and includes some spectacular scenic views along each river bank.
Duration: 40 minutes
Stop At: Yulong Bridge, Yulong Village, Baisha Town, Yangshuo County 450321 China
When we arriving in the Dragon village then we will visit the Yulong(Dragon) bridge for a while.
The Chinese word 'Yulong' refers to 'meeting a dragon'. Local legend has it that a dragon from the East Sea strolled across the Yulong River and, being deeply impressed by the attractive landscape, decided to stay there forever. The villagers living on the river bank saw the dragon several times, and hence the river is named so.
Duration: 10 minutes