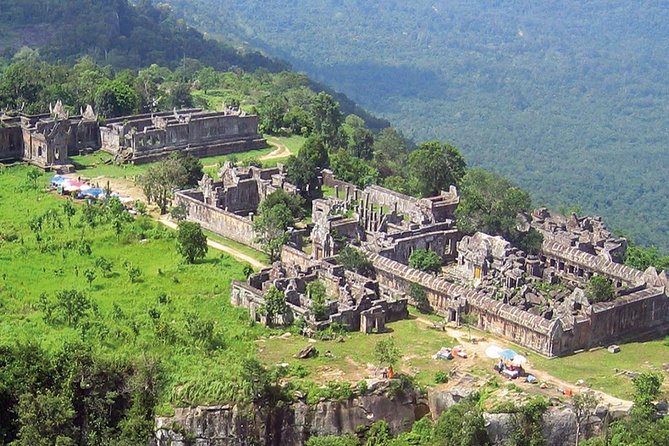 We will start the greatfull day private tour to Preah vihear temple from Siem reap. Visit a town of Anlong Veng which was served as the last head quarter of Khmer Rouge lasted till 1998. Visit a world heritage temple of Preah Vihear along the border.

This a Full Day Trip to explore Preah Vihear where at Dangrek Mountain range. This an incredible Preah Vihear temple, which staddles the Cambodian and Thai border. As you journey from Siem Reap to Preah Vihear province you pass through typical Cambodian countryside allowing a chance to learn more about the way of life in these farming villages. We explore the incredible monument and learn both about the temples ancient and more recent history.

Preah Vihear a Khmer ruin where built at top of the mountain in 9th century decate to Hedu religion. ( Preah Vihear Temple is a Hindu temple built during the reign of Khmer Empire, that is situated atop a 525-metre (1,722 ft) cliff in the Dngrk Mountains, in the Preah Vihear province, Cambodia. In 1962, following a lengthy dispute between Thailand and Cambodia over ownership, the International Court of Justice (ICJ) in The Hague awarded the temple to Cambodia. Affording a view for many kilometers across a plain, Prasat Preah Vihear has the most spectacular setting of all the temples built during the six-centuries-long Khmer Empire. As a key edifice of the empire's spiritual life, it was supported and modified by successive kings and so bears elements of several architectural styles. Preah Vihear is unusual among Khmer temples in being constructed along a long north-south axis, rather than having the conventional rectangular plan with orientation toward the east. The temple gives its name to Cambodia's Preah Vihear province, in which it is now located, as well as the Khao Phra Wihan National Park which borders it in Thailand's Sisaket province and through which the temple is most easily accessible. On July 7, 2008, Preah Vihear was listed as a UNESCO World Heritage Site. after visit Preah Vihear temple, we will transferback hotel in Siem Reap.

Truck to top of the mountain

Pickup and drop off from hotel client stay (in Siem Reap)

Please be ready and wait at hotel lobby for pick up services from 8:00am and Start Tour