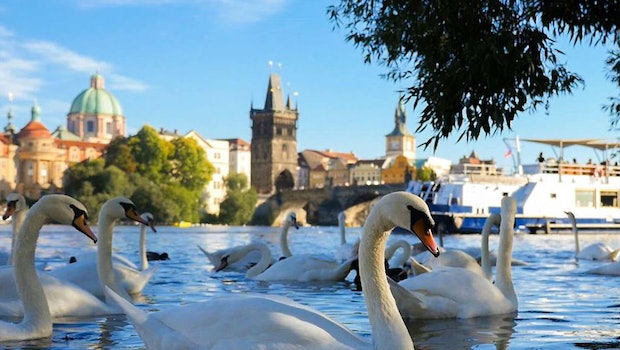 Learn about Pragues history from the water

The 50-minute cruise begins with a reminder of Prague’s cosmopolitan heritage. It sets off from ech Bridge, which is the country’s only large Art Nouveau bridge. After that is the Mánes Bridge which owes its form to the Czech Cubist movement of the 1910s. It’s not all rarefied art though, if you pay attention you might spot a gargoyle or two on the Prague coat of arms.

You’ll bask in the atmosphere of the entire city and take in sites such as the Rudolfinum, a neo-Renaissance building from 1885 that is home to the Czech Philharmonic. You’ll pass the Franz kafka museum and of course you’ll spot Prague castle in the distance. It would be hard to miss – it’s the largest castle in the world.

The highlight, though, is the Charles bridge. Built by Charles IV in the 1300s, it’s one of Europe’s grand bridges. 621 meters long and 10 meters wide, it sits on 16 stone arches. Its Old Town bridge tower is considered to be one of the most striking gothic-style buildings in the world.

It has been the staging ground for many historic events and is where the city finds its grand and stately self: Bohemian kings proceeded along it on the Royal Route as they went to be crowned.

So, allow yourself to glide along the Vltava river and take in Prague in all its glory. Should you desire it (and you will) you’ll find a nice draught of pilsner to be had onboard!