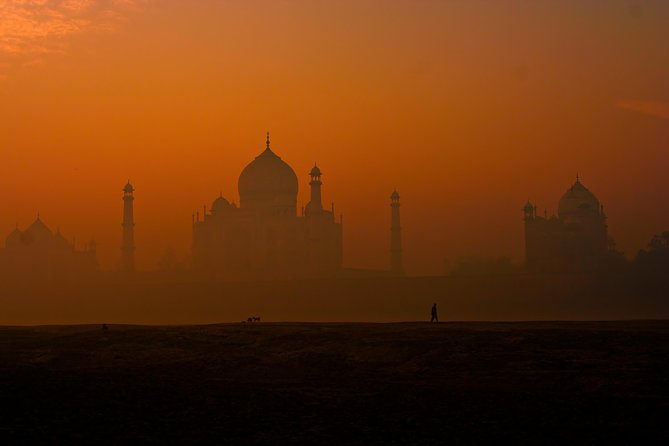 Explore Indias Golden Triangle on this fabulous 10-day tour led by an expert English-speaking guide. This is a spiritual, cultural, and informative journey. With all the important details already organized for you, such as 3-star hotel accommodation, itinerary, transport, and entrance fees, you can really relax and concentrate on experiencing the delights of India free from all the normal stresses of traveling. On this tour you will encounter unique experiences like witnessing the Taj Mahal at sunrise and soaking up the spiritual atmosphere of the River Ganges with a morning cruise.

Day 1: Arrive at Delhi Airport and meetup with your guide. Transfer to the Hotel Intercity (or similar) and stay overnight.

Day 3: Today, you will take an approximate 5-hour drive to Jaipur. Upon arrival, check into Hotel Rajputana Haveli (or similar). Enjoy some sightseeing, and have a free evening to explore Jaipurs excellent night markets. Overnight at your hotel.

Day 4: Explore Amber Fort, a magnificent example of Rajput architecture. Jeep Ride up to Amberfort. Afterward, visit the City Palace and the Palace of Winds. See the Royal Observatory, which was built by the Maharajah Jai Singh out of his passion for astronomy. Stay overnight at your hotel in Jaipur.

Day 5: After breakfast, take an approximate 5-hour drive to Agra. En route, visit the deserted city of Fatehpur Sikri, abandoned when the town's water supply dried up. Upon arrival in Agra, check in and rest at the Hotel Parador (or similar). Stay overnight.

Day 6: Visit the majestic Taj Mahal at sunrise. Afterward, make a trip to the Agra Fort. Have some free time to explore in the afternoon. In the evening, transfer to the station in order to board the overnight train to Varanasi. Sleep on the train.

Day 7: Meet up with your guide upon arrival in Varanasi, and transfer to Hotel Ganges Grand (or similar). In the afternoon, enjoy a city tour led by an expert guide. Stay overnight at your hotel.

Day 8: Explore Varanasi after breakfast. This is said to be India's most sacred city, situated on the western bank of the holy River Ganges. With hundreds of temples dotting the city, sunrise on the riverfront as seen from a boat can be a spiritually uplifting sight. Stay overnight at the hotel.

Day 9: Enjoy a morning boat cruise on the River Ganges and observe the way of life of pilgrims by the Ghats. Afterward, visit Sarnath, the Deer park and the museum. Head back to Varanasi to board the flight to Delhi. Upon arrival, meet your new guide and transfer to your hotel. Stay overnight at your hotel. (Please note: flight is not included in the price)

Day 10: This will be a free-day for relaxation and souvenir shopping. In the evening, transfer to the airport or train station for your onward journey.