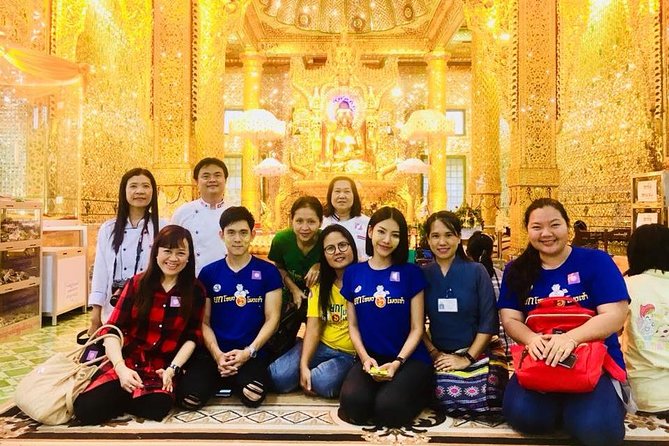 Itinerary
This is a typical itinerary for this product
Stop At: Shwedagon Pagoda, Yangon (Rangoon) Myanmar
Visit to the famous Shwe Dagon Pagoda described by Somerset Maugham: The Shwedagon rose superb, glistening with its gold, like a sudden hope in the dark night of the soul of which the mystics write, glistening against the fog and smoke of the thriving city. This massive bell-shaped stupa rises nearly 100 meters above its hill-top surroundings. Wander through this magnificent structure and its courtyards, stupa, bells, temples and Buddha images and see religious and secular visitors from all parts of the globe. Shwedagon has become the symbol of Myanmar.
Duration: 1 hour
Stop At: Chaukhtatgyi Buddha, Shwegondine Road Bahan Township, Yangon (Rangoon) Myanmar
Temple of the 65 meter long Reclining Buddha image. ... The Chauk Htat Gyi Pagoda in Yangon is known for its enormous 65 meters long Reclining Buddha image. ... The Reclining Buddha image is decorated with very expressive colors, white face, red lips, blue eye shadow, golden robe and red ...
Duration: 30 minutes
Stop At: Yangon Walking Tours, 51, Sint O Dan Street, Latha Township , Yangon (Rangoon) Myanmar ( Burma ), Yangon 11131, Myanmar (Burma)
More than half a century after the independence of Burma, many colonial buildings still bear witness to the greatness of the British Empire. The best way to see them is to walk along the Strand Road and stroll down the Pasodan street. You will be surprised by the large shaded alleys where the houses are decorated in the unique style of the Burmese colonial times. Large centennial buildings dot the city, proud of their beautiful architecture and witness to a bygone era.

Duration: 45 minutes
Stop At: Bogyoke Aung San Market, Bo Gyoke Rd, Pabedan 11141 Myanmar
Bogyoke market is also known as colonial Scott Market. Built by the British in 1926, it was first named in honor of James George Scott, a famous official especially for having introduced football in the country. It was renamed after independence in 1948 in honor of Bogyoke Aung San. This covered market is home to many shops and is renowned for its many jewelers, tailors and beautiful fabrics. Besdie handicrafts, many vendors offer lacquerware, puppets, paintings by local artists and other souvenirs. This is one of the attractions not to miss in Yangon.
Duration: 1 hour
Stop At: Aung San Suu Kyi House, University Avenue Road Junction Square, Yangon (Rangoon) 11131 Myanmar
The leader of the opposition to the ruling military government in Myanmar (formerly Burma), Aung San Suu Kyi brought international attention to the struggle for human rights and the restoration of democracy in her country. An advocate of nonviolent protest, she was under house arrest in Yangon when she was awarded the 1991 Nobel prize for peace.
Her party boycotted the 2010 elections, resulting in a decisive victory for the military-backed Union Solidarity and Development Party. Aung San Suu Kyi became a Pyithu Hluttaw MP while her party won 43 of the 45 vacant seats in the 2012 by-elections. In the 2015 elections, her party won a landslide victory, taking 86% of the seats in the Assembly of the Union well more than the 67 percent super majority needed to ensure that its preferred candidates were elected President and Second Vice President in the Presidential Electoral College. Although she was prohibited from becoming the President due to a clause in the constitution her late husband and children are foreign citizens she assumed the newly created role of State Counsellor, a role akin to a Prime Minister or a head of government.
Duration: 10 minutes