12-Day Morocco And South Of Spain Tour From Madrid 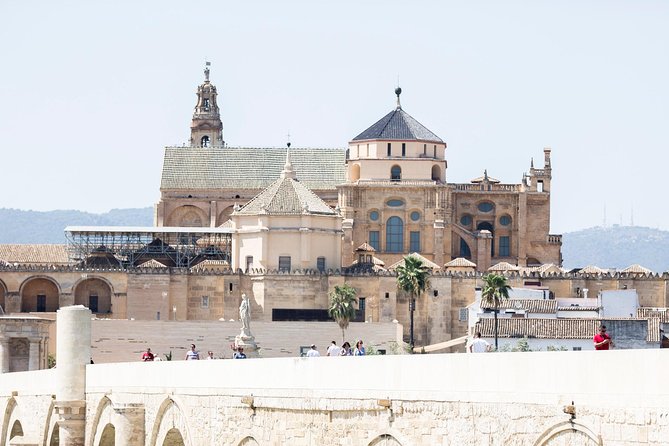 Discover Morocco and the south of Spain two contrasting countries that share a rich history on a 12-day tour from Madrid with a 3 or 4-star hotel accommodation included! While traveling with an expert guide, explore the Andalucian region in Spains deep south, staying in Seville, the Costa del Sol and Granada. Learn about Andalucias 15th-century Moroccan rulers on excursions to Cordoba and Ronda, and then cross the Strait of Gibraltar to Morocco itself. Stay in top cities like Fez, Marrakech, Rabat and Tangier, and learn all about the enchanting country from a guide.

The southern Spanish region of Al-Andalus or Andalucia, as its now known was once ruled by the Moors and Berbers of Morocco, who created an Arabic kingdom and culture that is still prevalent today. Visit Andalucias old Moorish cities such as Seville, Cordoba, Ronda and Granada as well as the Costa del Sol region, and then compare their sights with Moroccan cities like Fez, Marrakech, Casablanca, Rabat, Tangier and more!

Enjoy a combination of tours and free time to see the historical cities at your own pace. Your hotels are centrally located for maximum convenience.

Day 1: Madrid – Cordoba – Seville (D)
Start with a transfer from central Madrid to Cordoba, and admire the gorgeous countryside along the way; it’s a gorgeous area made popular by the Spanish novel The Ingenious Gentleman Don Quixote of La Mancha. Enjoy a break for lunch in Cordoba on arrival (own expense), and then set off on a tour of the city to discover its mix of Jewish and Arabic culture. Admire the glorious Mezquita and the medieval architecture of the Jewish quarter with its whitewashed courtyards, winding alleys and leafy squares. Then, leave Cordoba and travel to Seville where your overnight accommodation awaits. Check in, enjoy dinner and spend your night at leisure.

Day 2: Seville (B, D)
After breakfast, relax on a morning tour of the Andalucian capital of Seville, seeing highlights like Seville Cathedral, the Santa Cruz quarter and Maria Luisa Park. Hear little-known facts and secrets about the lively city from your guide, and learn of its rich Arabic legacy as you explore neighborhoods like Triana and La Macarena.

Spend your afternoon exploring Seville at leisure, and then return to your hotel for dinner. Relax in the evening, perhaps enjoying a nighttime stroll alongside the banks of Guadalquivir River.

Day 3: Seville – Ronda – Costa del Sol (B, D)
Following breakfast, travel to Ronda, a magical cliff-top city perched on top of El Tajo Gorge. Enjoy free time to explore, admiring sights such as Ronda Bullring (the oldest in Spain) as well as ancient bridges that span the town’s ravines. Stroll around and marvel at the poetic views; you’ll quickly realize why the town was popular with the likes of Ernest Hemingway and Orson Welles. Leave Ronda and continue to your hotel on the sun-soaked Costa del Sol. Laze on the beach or explore the area at your own pace before dinner.

Day 4: Costa del Sol – Fez (B, D)
Leave your Costa del Sol hotel after breakfast and travel along the sunny coast to the port at either Algeciras or Tarifa. Board your ferry and cross the Strait of Gibraltar to the shores of Morocco, where your air-conditioned coach awaits. Hop on board and travel south to Fez, an inland city that’s often described as the spiritual heart of Morocco. Check in to your hotel, savor dinner and spend your night at leisure.

Day 5: Fez (B, D)
Relax over breakfast, and then head out to see the city’s sights on a walking tour. Learn of Fez’s imperial history while stopping for photos by big-name monuments like Fez Royal Palace. Explore the Christian and Jewish quarters and wander around the Medina, a twisting maze of alleyways with bustling souks (markets) and shops around every turn. Take a break for lunch (own expense), and then enjoy free time for the rest of your day. Your guide will happily organize a trip after dinner to a traditional Moroccan show, if you wish (own expense).

Day 6: Fez – Meknes – Marrakech (B, D)
Enjoy your hotel breakfast, and then start traveling south to Marrakech, the country’s cultural capital. The journey lasts roughly five hours, so make the most of a stop in the town of Meknes. Explore the Imperial city with your guide, seeing historical landmarks like Hedine Square and the grand Bab Mansour Gate. Take a break for lunch (own expense), and then continue to Marrakech. Check in to your hotel, enjoy dinner and spend your evening at leisure.

Day 7: Marrakech (B, L)
After breakfast, see the sights of Marrakech with your guide. On a walking tour, keep an eye out for Koutoubia Mosque, with its famous minaret towers, and pass Saadian Tombs – an elaborately decorated mausoleum where some of the country’s eminent sultans are laid to rest. Discover the delights of Bahia Palace and Djemaa el-Fna, the city’s colorful and chaotic central square that teems with fortune tellers, snake tamers, acrobats, dancers and more.

Day 8: Marrakech – Casablanca – Rabat (B, D)
Leave your Marrakech hotel after breakfast and travel north to Casablanca, about 2.5 hours away. Sit back and relax on a tour of the city by coach, taking in Casablanca’s distinctive Mauresque architecture that’s said to be inspired by the Art Deco movement. Learn about sights like Hassan II Mosque and admire attractions like the Royal Palace in Quartier Habous. Take a quick break for lunch (own expense) and then travel to Rabat – Morocco’s capital city. Check in to your hotel in time for dinner.

Day 9: Rabat – Larache – Tangier (B, D)
See the sights of Rabat on a tour after breakfast, admiring monuments like the majestic Royal Palace, Mohamed V Mausoleum and Hassan Tower with its eye-catching red facade. Hear about Rabat’s laid-back culture from your guide while exploring, and then head out of the city to travel to the coastal town of Larache.

After a short lunch break (own expense), continue to Tangier: your final destination of the day. Check in to your hotel and then head out to discover Tangier’s top attractions on a coach tour. Hear about Tangier’s raucous history, with tales of the Greeks, Phoenicians, Romans, Arabs and Berbers who fought over the city, and then sidle past the labyrinth-like Medina – home to the Grande Mosque. Return to your hotel in the late afternoon and savor dinner in the evening.

Day 10: Tangier – Costa del Sol (B, D)
Relax over your final breakfast in Morocco, and then travel to the port. Cross the Strait of Gibraltar by ferry to arrive back on the Costa del Sol in Spain. Check in to your hotel and spend the rest of your day doing whatever you please. Enjoy dinner in the evening.

Day 11: Costa del Sol – Granada (B, D)
Leave your Costa del Sol hotel after breakfast and travel to Granada, one of Spain’s last Moorish cities. Visit the city’s star’s attraction – the incredible Alhambra complex and Generalife Gardens – and learn how both sites enjoy a deserved place on the lauded UNESCO World Heritage Site list. Stroll through the mosaic-tiled and landscaped gardens to discover the history of Spain’s Moorish rulers and marvel at their exotic architectural legacy. Check in to your Granada hotel in time for dinner, and spend your evening at leisure. Your guide will happily organize a trip to the Sacromonte Caves for a flamenco show, if you wish (own expense).

Day 12: Granada – Toledo – Madrid (B)
After breakfast, wave goodbye to Granada as you travel to the UNESCO World Heritage-listed city of Toledo. Learn about the fortified city’s Christian, Moorish and Jewish roots and see its well-preserved medieval architecture on a city tour. After lunch (own expense), enjoy a stroll with your guide, discovering Toledo’s enchanting cobblestone alleyways while hearing about the work of artist El Greco who hailed from the town. Look out for examples of Toledo’s signature Damasquinado metalwork, delicately etched with gold, and then hop back on board your coach to travel to central Madrid, where your tour finishes.

Tour escort during the tour.

Food and beverages, unless specified

Each traveler is allowed a maximum of 1 suitcase with a maximum weight of 29lbs (13kg) and 1 carry-on bag.

Customers will pass through customs control with luggage.

Passport name, number, expiry and country is required at time of booking for all participants.

A current valid passport is required on the day of travel.

Infants aged 3 years and under are free of charge, providing they do not occupy a seat on the bus. Please note, any expenses incurred at the hotel (i.e. cot, meals, etc) should be paid directly to the hotel.