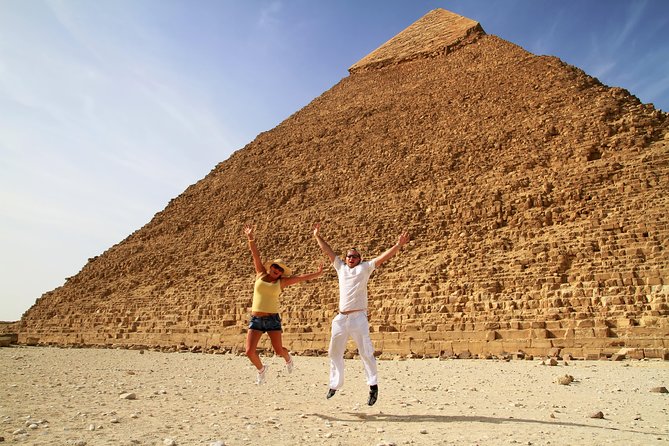 Tour Cairo for 2 days from Eilat.
Tour the city, the pyramids, the sphinx, the Egyptian Museum, the Old City of Cairo, Sakkara and the Pyramids.
Tour the Egyptian Museum with a professional licensed guide.
Private and hotel upgrade options available depending on option selected.

Stop At: Cairo Tower, Cairo, Cairo Governorate
Day 1: Eilat - Cairo [L]
A driver will pick you up from your hotel in Eilat at about 21:00 pm and take you to the Taba border. After crossing the border, begin the drive to Cairo (about 7-10hours). Start the tour with the pyramids, the sphinx, the Egyptian Museum (mummy room not included), and then the market, where they sell everything under the sun. Afterwards, head for lunch in a local restaurant. After lunch you will check into your hotel for your overnight stay. You also have an option to do a Nile cruise (not included).
Duration: 15 minutes

No meals included on this day.
Accommodation included: Overnight in the Hotel

Stop At: Cairo Citadel, Cairo, Cairo Governorate
Day 2: Cairo - Eilat [B]
After breakfast in your hotel, begin your day with a tour through the Old City of Cairo. Later, travel to the Sakkara Valley to view some of the largest pyramids in the world, including the Djoser Step Pyramid, one of the most famous pyramids in the world. After lunch travel back to the Taba border crossing.
Duration: 15 minutes

Hotel pickup and transfer to the Egyptian border

Visa for Egypt $60. paid at the border only

Border fees to Egypt $65 paid at the border only

Extra payment of $25 for guides in other languages except english

Drop Off at the hotel after crossing back

There is no need to make visa in advance