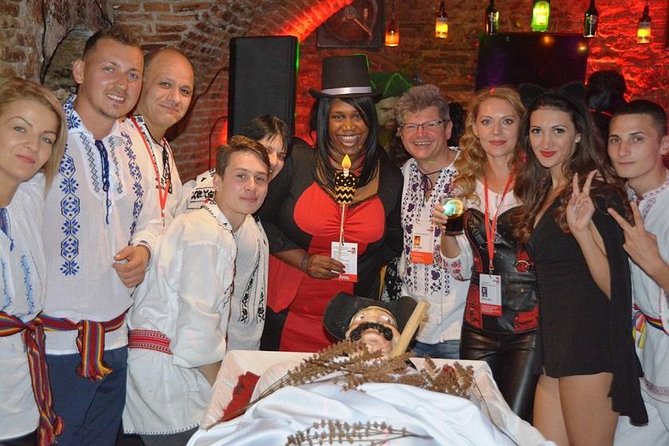 Enjoy the best Halloween ever in Draculas birth place the Medieval Citadel of Sighisoara! A 2 day self guided break departing from Bucharest. The main highlight is the Halloween Party including a delicious traditional dinner, an excellent show and providing you with a truly memorable experience. Halloween partyis housed in thedungeon of a historical building in the heart of the medieval citadel.

The Halloween Party is the most entertaining event that you can experience in the heart of Transylvania. Let yourself drawn in by the medieval charm of the Sighisoara Citadel, the place where you will party till dawn. You will serve traditional food and drinks and you will witness breathtaking events.
Your driver will meet you at Bucharest airport or any hotel from Bucharest or Otopeni, you will be transferred to Sighisoara, party till morning and next day 11:00 after breakfast , transferred back to Bucharest. On your way to Sighisoara you will visit Peles castle and Bran Castle entry fee is not included)
Halloween Party program
The guests are welcomed with a traditional Romanian drink prepared especially for the cold season a shot of Romanian water of fire boiled with pepper will increase the interest in the delicious mouth-watering traditional dishes prepared for the Halloween party. The Master of Ceremony, one of Draculas many subjects, will introduce the guests to the program of the evening making sure everyone will meet his fate!The first event youll enjoy is performed by the Transylvanian Knights. The Vampiresa Hunting will lead you to middle ages, times of great struggles of any kind. Our brave knights, tough and trained warriors will face the undead. Vampiresa (She- Vampire) will use her monstrous tactics against the knights. Should anyone dare to handle the sword and fight along with the knights to suppress the evil woman, will be anointed as a knight.
There can be no Halloween Party without Dracula and his relatives! "Black witch of the woods" is something darkly-marvellousbeyond any earthly sensation. Find out why!Since were all very familiar with dramas, well then focus on having a fabulous time, and what better way to do this than dancing! You will be introduced to the gypsy rhythms as well as the melodious and cheerful Romanian folk songs. The traditional Scarf dance will bring everyone to the dancing floor! The next event: "The Ritual of Killing of the Living Dead" performed according to the old burring ritual in Transylvania meant to reveal who was dwelling the magic realms of Transylvania prior to vampires.Close to midnight will all step out to watch the moon and count down the minutes to 12 oclock, a time of powerful magic when all bad wishes come true! A glass of champagne and the traditional Rest in Peace song will delight us afterwards.

Transport by air-conditioned minivan - depends on the number of travellers

Candy Bar and champagne around midnight