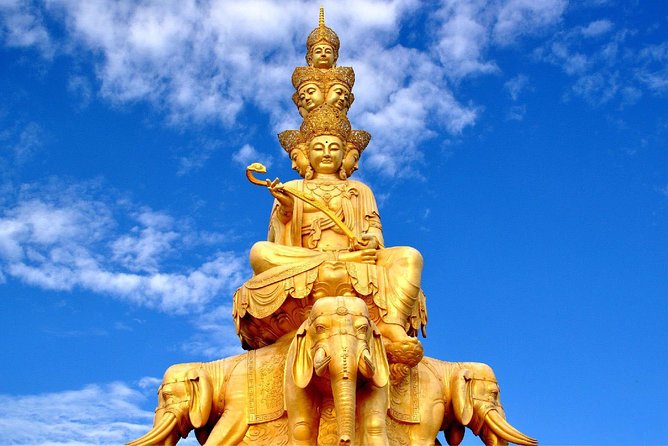 An overnight comfortable stay at the foot of Emeishan to soak up the serene Buddhist atmosphere is also inclusive.

Day 1: Chengdu - Emeishan - The Golden Summit - Foot of Mt. Emei
Meet your guide in the hotel lobby, head out to high-speed train station either by metro or by car. (The type transportation is depend on the location of your hotel)

During this comfortable train journey (about one hour 20 minutes), you can mingle with locals and enjoy the idyllic landscape of the Chengdu countryside. On arrival, you'll take a tour bus to the highest parking lot in Emeishan--Leidongping (about 1.5 hours) and then hike 30 minutes to catch the cable car up to spectacular Golden Summit.

On the Golden Summit, you'll see a giant gold-plated bronze statue of Puxian Buddha (48 meters tall and weighing 660 tons), one of the tallest gold-plated Buddha statues in the world. Behind the statue, there are three magnificent buildings, gold, silver and bronze palaces housing even more exquisite Buddhist statues.

In the afternoon, take cable car and bus all the way down to the foot of mountain, and trek the hidden path along the spring to tranquil Fuhu monastery which is surrounded by dense forest.

Your day will be end by stepping into the back door of Baoguo Temple, visit this time honored monastery when all the tourists are gone.

The Leshan Buddha is carved out of a cliff, facing the junction of three rivers. You will first climb 333 steps to the top of Lingyun Hill. On the hilltop, you will be able to see three rivers confluence in front of Giant Buddha, and explore Buddhist sculptures and murals inside of Lingyun Temple. Then, descend along the red sand cliff to view the phenomenal Leshan Giant Buddha from his feet.

If there was a long queue to go down to the feet of giant Buddha, skip the line, and take the river cruise to behold the panoramic view of Leshan Giant Buddha is recommended.

Then, your guide will take you on a local path which is less taken by tourist groups to an old fishing village and visit the over 2000 years old tombs and the elegant bridge over the river.

Before you head out to Leshan railway station, if time permit,our guide will show you around the old area of Leshan city.

Your guide will escort you either by metro or taxi to your hotel in Chengdu.

1 night comfortable accommodation according to the tour option. (base on 2 person sharing 1 room)

Sightseeing bus and cable car to Golden Summit in Emeishan

Transportation as stated in the itinerary

Meals and activities which are not included in the itinerary

Operates in all weather conditions, winter on the Golden Summit will be below 0 degree, please dress appropriately

The accommodation is base on 2 person sharing 1 room, single room supplement will be charged if the travelers are in odd number.