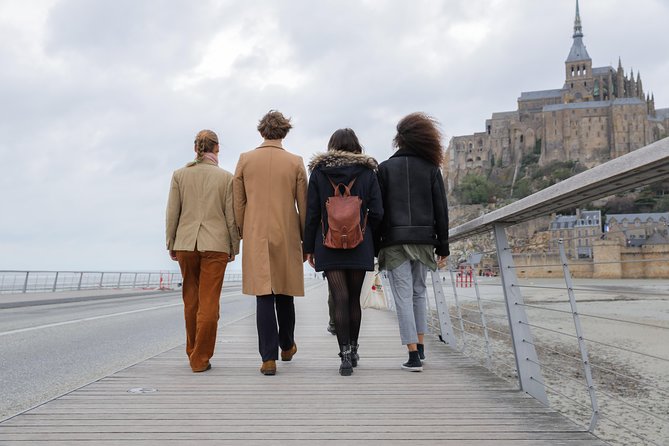 Discover the regions of Normandy and the Loire Valley on this 2-day tour from Paris. Visit iconic Mont St-Michel and then venture through chteau country to visit several renowned castles like Chteau de Chenonceau. Your guide will reveal the history of these must-see regions and sights during your guided visits. If you have a short stay in France, this easy trip from Paris is a fantastic way to see more of this beautiful country. Overnight accommodation and comfortable coach transport is included.

Day 1: Paris — Mont St-Michel — Angers (L,D)Meet near the Pyramides metro station in Paris in the morning to meet your guide and board your air-conditioned coach. Relax on the long drive through the Normandy countryside of northern France to your first destination: Mont St-Michel.
One of the country's most iconic attractions, the UNESCO World Heritage-listed abbey of Mont St-Michel is perched on a rocky island amid a vast bay and encircled by stout ramparts and battlements. After fueling up with lunch at a local restaurant, follow your guide on a walk to the top of the hilly village, where you’ll then travel back in time as you enter the fascinating abbey.
As you'll learn, Mont St-Michel was a major cultural and pilgrimage center during the Middle Ages. Legend has it that the abbey was established in the 8th century, when the bishop of Avranches was visited by the Archangel Michael in a dream. Today, the abbey is still crowned by a gilded copper statue of Michael slaying a dragon, representing the triumph of good over evil.
Visit the abbey’s cloister and refectory, and see how the ramparts have been added to support the Gothic monastery over the centuries. After your tour, wander the surrounding village at your leisure. Walk around the abbey's ramparts, shop along the main street, visit the island's museums, and witness Mont St-Michel's most well-known and alluring feature: the extreme tides. At low tide, the island can be surrounded by bare sand for miles, but at high tide — just six hours later — sea water swells up and fills the bay, surrounding the whole island.
In the late afternoon, re-board the coach and depart south for the Loire Valley. This scenic region in central France is marked by wide, flat green plains dotted with picturesque villages and vineyards, as well as the country’s most renowned châteaux — there are more than 300 here!
Arrive in the city of Angers in the evening for dinner with your group and an overnight stay.
Overnight: 3-star hotel in Angers
Day 2: Angers — Langeais — Amboise — Chenonceaux — Paris (B)After a buffet breakfast at your hotel, enjoy a day full of stately French castles and incredible scenery. You’ll take guided visits of three of the most remarkable Loire Valley châteaux.
Start with a brief photo stop at Château d’Angers, hanging over the River Maine. Founded in the 9th century by the Count of Anjou and expanded in the 13th century, it is home to the Apocalypse Tapestry, the largest tapestry in the world.
Then head to Château de Langeais, also founded by the Count of Anjou. This castle was attacked by the Count of Blois and then destroyed during the Hundred Years’ War. In the 15th century, King Louis XI rebuilt it into a grand château, and it now serves as one of the world’s best examples of late medieval architecture.
Continuing on your drive, pass the towns of Cunault and Saumur on your way to the quaint town of Amboise on the banks of the Loire, where you’ll stop for lunch.
Your next stop is Château de Chenonceau, one of the most iconic Loire Valley castles with a fascinating history. Straddling the River Cher, it served as an escape route during World World II from the Nazi occupied zone on one side of the river to the ‘free’ zone on the opposite bank.
After your visit, pass by Château de Cheverny for a glimpse of the exterior before making your way to your final destination.
Re-board the coach and relax on the drive back to Paris, arriving at night.

Overnight accommodation in a 4-star hotel

There are no triple rooms available in the hotel

There is a maximum of two people per room. Separate bookings should be made for each room required