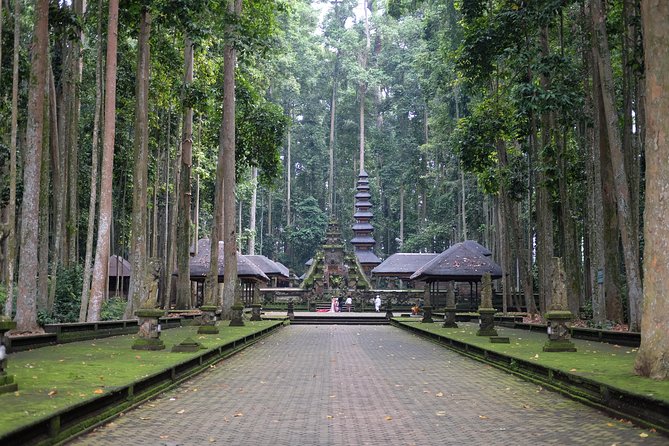 Enjoy a 2-day private sightseeing tour of Bali to visit attractions such as Tirta Empul Temple, the Mt. Batur volcano, Tanah lot temple, the Uluwatu temple at sunset, and Tegalalang Rice Terrace. You'll also have the chance to check out a coffee plantation, and admire countryside views as you travel in the comfort of a private vehicle. The tour starts with pick up from your hotel both mornings as you will be returning to your accommodation on the first night.

Stop At: Tohpati Village, Denpasar, Bali
First you will be visiting some of Bali's art villages, such as Tohpati, known for batik
Duration: 30 minutes

Stop At: Celuk Village, Sukawati, Gianyar Regency, Bali
Second you will be visiting Celuk village, known for gold and silver, we can see making process.Small to big many items to choose from. Reasonable to expensive jewellery also available.
Duration: 30 minutes

Stop At: Tirta Empul Temple, Tampaksiring, Gianyar Regency, Bali
Next head to Tirta Empul Temple (Spring Holy Temple), located in the village of Manukaya. Tirta Empul is actually the name of a water source within the temple where the Balinese go to bathe in the sacred waters for healing and spiritual benefits.
Duration: 1 hour

Stop At: OKA Agriculture Bali
Then head to the village of Temen to visit a coffee plantation, where you'll learn about the coffee-making process and can sample a few different varieties. You might also be able to try luwak coffee, one of the most expensive coffees in the world, made by collecting coffee beans eaten and digested by wild civets.
Duration: 30 minutes

Stop At: Mount batur, Kintamani, Bangli, Bali
Continue to Mt. Batur, a volcano also known as Kintamani, where you can admire a view of its caldera.
Duration: 30 minutes

Stop At: Tanah Lot Temple, Beraban, Bali
First you will be visiting Tanah Lot Temple, known for its perch on a rock formation. one of the seven sea temples along Bali's coastlinewhich is part of the island's mythology.
Duration: 1 hour

Stop At: Taman Ayun Temple, Mengwi, Bali
Then you will make the 30-minute drive to Ayun Temple, the royal family temple of the Mengwi Kingdom. Translating to 'beautiful garden,' Taman Ayun was built in the 1600s and is surrounded by a moat.
Duration: 30 minutes

Stop At: Nusa Dua Beach, Nusa Dua, Nusa Dua Peninsula, Bali
About an hour drive from Tanah lot to Nusa Dua Beach, a coastal paradise that attracts tourists with its crystal clear waters and white sands. You will have a chance to spend a while relaxing in the seaside paradise.
Duration: 2 hours

Stop At: Uluwatu Temple, Pecatu, Nusa Dua Peninsula, Bali
After a 30-minute drive to Uluwatu Temple, settle into a prime, cliff side vantage point to watch the sun set on the ocean. Your driver provides an overview of the temples history and religious significance during the experience. Once darkness has descended, watch a mesmerizing Balinese dance, the Kecack fire dance, before returning to your hotel in the early evening.
Duration: 2 hours