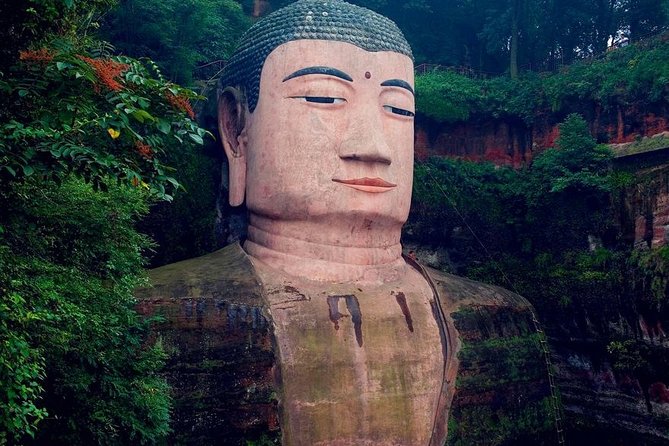 Spend two days visiting two different UNESCO World Heritage sites in Leshan on this all-inclusive tour! Your private guide will lead you on an exploration to the Leshan Grand Buddha, the largest stone Buddha sculpture in the world, standing at an impressive 233 feet (71 m)! Soar to great heights on a cable car ride up Emei Shan (Mt Emei) and explore remarkable Buddhist temples and sculptures. Spend the night at an ancient Buddhist monastery built during the Ming Dynasty and have the flexibility to enjoy your meals when you want. All meals, your own private guide and private transportation to site locations are included.

Day 1: Leshan Grand Buddha (L, D)After private pickup from your Chengdu hotel, enjoy a relaxing 2-hour drive to the Leshan Grand Buddha. Spend four hours on a guided exploration of the surrounding trails and visit the Wuyou Temple, which houses a large number of calligraphic paintings and various Buddhist artifacts. At the foot of this structure, admire its grandeur - at 233 feet (71 m) high and 92 feet (28 m) wide, it is the largest stone Buddha sculpture in the entire world!

A short drive will take you to the foot of UNESCO World Heritage-listed Emei Shan. Covering an area of about 10 acres (4 ha), there is plenty to see on a walking tour with your guide, like the classical Chinese courtyard surrounded by springs and ponds or the Tiger-Taming Temple, allegedly named because of a pillar built in front that protects people from tiger attacks.

Spend the night at Baoguo Monastery, an ancient temple where you can witness elements of Buddhism, Taoism and Confucianism.
Day 2: Emei Shan (B, L)After breakfast, follow your guide to the excursion bus that will take you to the cable car station. Board the cable car with your guide to ascend Emei Shan to the Golden Summit. Upon disembarking, find yourself among a sea of clouds at 9,842 feet (3,000 m) above sea level. If you wake up early enough, you can enjoy a gorgeous sunrise from the summit that many people come from afar to witness.

See the tallest golden statue of Puxian, standing at 157 feet (48 m) high. Explore two traditional Buddhist temples - the Woyun Nunnery and Hua Zang Si, where you will find countless padlocks inscribed with couples' names to symbolize eternal love. After spending a whole day atop Emei Shan, your guide will lead you back to the cable cars to descend the mountain, where youll embark on your journey back to Chengdu.

An extensive amount of walking is involved; comfortable walking shoes are recommended

During sightseeing, passenger's belongings will be tucked away safely in the van or in their accommodations. Please be advised to bring along any essentials for sightseeing (e.g. water, sunscreen, sunglasses)

Accommodations provided are twin rooms with standard amenities; it is recommended that you bring your own toiletries

Please dress appropriately for Baoguo Monastery; shorts are allowed but tank tops and/or bikinis are not recommended