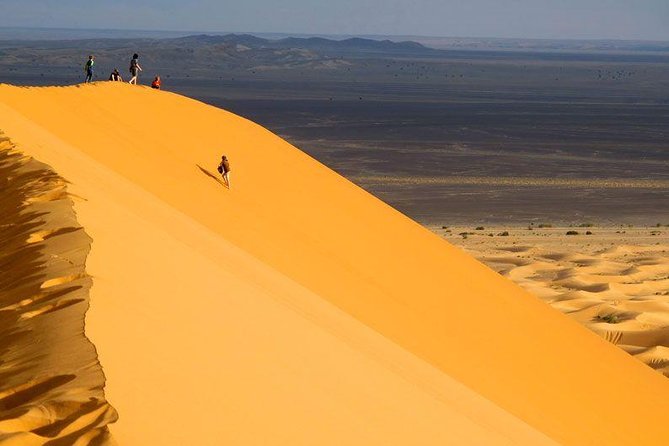 Discover the best of the Moroccan Desert on this two day guided tour complete with a camel ride. Cross the Jbel Anaouar Mountains to arrive in the fantastic Dra Valley, lined with date palm groves and walled villages (ksour). Explore the Dra River that runs through the valley and provides a spectacular green landscape with an impressive backdrop of mountains.

Day 1: Marrakesh – High Atlas – Ait Ben Haddou – Zagora – Camel Trek – Desert Camp
You'll leave Marrakesh at 7am, pass through the Atlas mountains and at 9:30 you will have a short stop for breakfast at the beginning of the mountains in Tadart Village. Afterward, you'll see Ait Ben Haddou Kasbah where you will have a long stop to explore The Ksar.

Then it's off to Ouarzazate City, the Moroccan cinema capital, for a lunch stop. After, you will pass through Agdz and many Berber villages during your visit of the Draa Valley and its Palmeraie. From there, you will make your way to the Zagora Desert to start your 1.5-hour camel ride to the camp where tea and dinner will be served before playing some music around a fire.