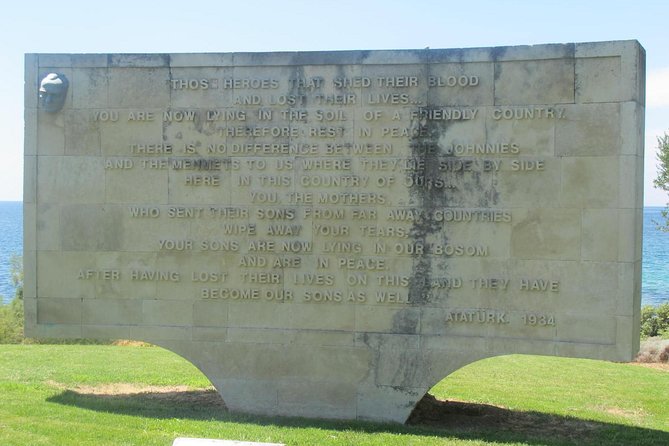 Step back in time at Gallipoli and Troy on this enlightening 2-day tour from Istanbul, including round-trip transport, three meals and overnight accommodation. Head to Gallipoli to visit the battle sites of the World War I campaign, when Australian and New Zealand Army Corps (ANZAC) troops fought the Turks in what would become a deadly stalemate. After an overnight hotel stay in anakkale, explore ancient Troy, famed for the Trojan War and legendary wooden Trojan horse. Enjoy in-depth attention from your guide on this small-group tour, limited to 14 people.

Your tour includes round-trip transport from Istanbul, together with a tour of Gallipoli on Day 1 and an included dinner and one night's accommodation at a 5-star hotel in nearby anakkale. On Day 2, your tour includes breakfast at your hotel, an excursion to ancient Troy, and an afternoon free in anakkale before your return to Istanbul in the evening.

Day 1: Istanbul – Gallipoli – Çanakkale (L, D)Leave your hotel on the European side of Istanbul in an air-conditioned coach, and travel toward the Gallipoli Peninsula, the scene of one of WWI’s bloodiest military campaigns. Your pickup time is early, so enjoy breakfast (own expense) during a brief stop just outside the city.
After roughly four hours, arrive at Gallipoli, where memorials still testify to the Allied campaign of 1915-1916. On 25th April 1915, soldiers mainly from the Australian and New Zealand Army Corps landed on this now-peaceful peninsula to fight the Ottoman Turks and capture Istanbul, known then as Constantinople. The ANZAC attack met with fierce Turkish resistance and the campaign ended when Allied troops were evacuated in January 1916, only after an estimated total loss of 100,000 men across both sides.
Visit the main battle sites and memorials as your guide explains the terrible events that marked the campaign. See the Turkish and Allied trenches at Johnston’s Jolly and view The Nek, a mountain ridge that presided over a tragic Australian attack.
Stand at ANZAC Cove, the beach that saw the first landings, and pay your respects at the Australian Lone Pine Cemetery and Memorial, the latter inscribed with the names of almost 5,000 soldiers without a grave. You'll also visit the New Zealand Memorial at Chunuk Blair, the site of a heroic stand by New Zealander troops.
During your tour, take a break for an included lunch at a local restaurant. Then, when your tour ends, travel to your hotel in nearby Çanakkale for an included dinner and the evening at leisure.
Overnight: 5-star Kolin hotel in central Çanakkale or similar

Day 2: Çanakkale – Troy – Istanbul (B)After breakfast at your hotel, set off by coach on your excursion to ancient Troy, roughly 30 minutes away by road.
Wreathed in legend, this UNESCO-listed archaeological gem is the location of ancient Troy, a city that many scholars believed, until its discovery in 1793, to have been dreamt up by the poet Homer for the purposes of his great work, The Iliad. The city is best known for the Trojan War of the 13th or 12th century BC, when after a 10-year siege by Greek forces, it fell into their hands after they smuggled soldiers inside its walls hidden within a giant, wooden horse.
Gaze in wonder at the crumbled walls and relics as your guide recounts the city's history, including the Greek myth of the Trojan prince (Paris) whose flight with Zeus’ daughter (Helen) triggered the war. You’ll also see the huge, replica wooden horse that stands here to commemorate the city's infamous past.
After your explorations, return to Çanakkale and spend the afternoon as you wish. Perhaps have lunch (own expense) at one of the many enticing restaurants, explore the town's other sights, or shop for souvenirs.
At around 6pm, board your coach and drive back to Istanbul, where your tour concludes with a hotel drop-off in the late evening.

Overnight accommodation in a 5-star hotel

Confirmation for this product will be received within 48 hours, subject to availability

A maximum of 2 people per booking

Please note: You must contact your local service provider 24 hours prior to the tour to reconfirm your departure point and time