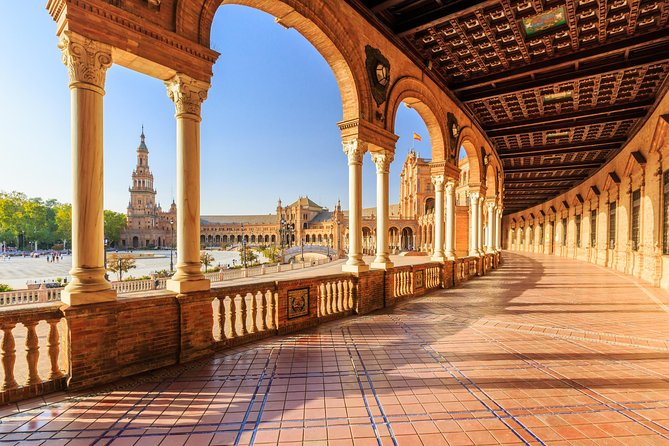 Take time out to tour two of Andalucia's most popular cities, Cordoba and Seville, on a two-day excursion from Madrid. You'll visit UNESCO World Heritage Sites and discover the rich history of this beautiful Spanish region.

Departing Madrid, you'll travel through the legendary country of Don Quixote to reach Cordoba. Your city tour of Cordoba's mosque and the Jewish quarter will reveal a beautiful network of streets, alleys, squares and whitewashed courtyards, reflecting the importance of the city in the medieval period.

Next, it's on to Seville to take a tour of the beautiful city's many highlights, including the cathedral, gardens and Santa Cruz quarter. Built on the banks of the Guadalquivir River, lively Seville has a rich Arab legacy and colorful local districts such as Triana and La Macarena.

Day 1: Madrid - Cordoba - Seville (D)
Morning departure from Madrid along the land of Don Quijote -The Man from La Mancha. Upon reaching Cordoba there is time for lunch and a city tour visiting the Mosque and the Jewish Quarter. In the afternoon proceed to Seville for dinner and overnight.
Seville accommodation: Catalonia Santa Justa (3-star) or Melia Lebreros (4-star)

Day 2: Seville (B)
After breakfast, enjoy a morning city tour (The Cathedral (outside), Santa Cruz Quarter, Maria Luisa Gardens). The afternoon is at leisure for you to discover exclusive views, specific favors of this full of light city. In the late afternoon transfer on your own to the train station to depart by AVE, high speed train, at 6:45 pm from Seville arriving to Madrid at 9:15 pm

The hotels detailed above are as a reference only and are subject to change.

Infants aged 3 years and under are free of charge, providing they do not occupy a seat on the bus. Please note, any expenses incurred at the hotel (i.e. cot, meals, etc) should be paid directly to the hotel.

Each traveler is allowed a maximum of 1 suitcase.