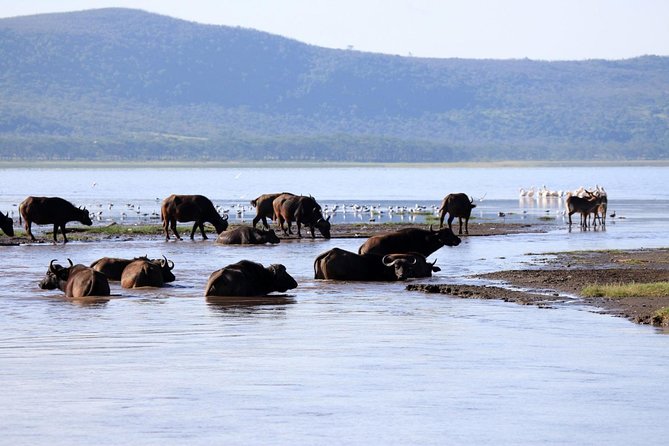 Enjoy private guided tour from Nairobi, explore the Lake Nakuru, Hell's Gate and Lake naivasha, spot animals on morning and afternoon game drives, and see birds and hippos . Hell's Gate National Parkis known as the only park where you can drive, walkanddo some cycling within thePark then spice up your excursion with a boat ride in Lake naivasha.This is a private tour for a minimum of 2 people.

You will be met atyour Nairobi city hotel by our safari driver guide who will drive northwest toLake Nakuru. There will bea short stop at a viewing pointto have a look at theGreat Rift Valleyfrom an elevated position. Your journey will continue toLake Nakuru, arriving in time for a pre-lunch game drive.

Lake Nakuru National Park is home toGiraffes,Waterbucks,Black and White Rhinos,Buffalo,LionsandLeopards, among other wildlife. On the shores of the lake there arethousands of Flamingos who feed on the algae.

Lunch will be at theLake Nakuru Lodge, Sarova LionHill Lodgeor similar (own expense). There will be an afternoon game drive around Lake Nakuru and the forest nearby.

Arrive at the gate of Hell's Gate around mid morning, start biking tour for 2 hours within hell's gate, some people will opt to drive which is also allowed. Animals seen here include Bushbucks, Dikdiks, Giraffes, Gazelles, Gnus, Hartebeests, Impalas, Klipspringers, Buffaloes, Hyraxes, Zebras, Hyenas, Jackals, Mongooses, Baboons, Monkeys and Porcupines amongst others. The park has historically been an important home for the rare lammergeyer vultures.

From 11am, visit the gorges for 1 hour,capture beautiful panoramas of the gorge's small thin depressions of land mass where you can walk underneath.

Around 12pm return the bike at the gate, on the way visit the Maasai community. Then at 1pmforLunch Naivasha Fishermans camp(own expense). At 2pm, enjoy a relaxing boat ride on Lake Naivasha where you can see some of the local wildlife which includes hippos, buffalo, fish eagles, pelicans and much more for 1 hour.

End of the tour drive back to Nairobi arriving around 6pm