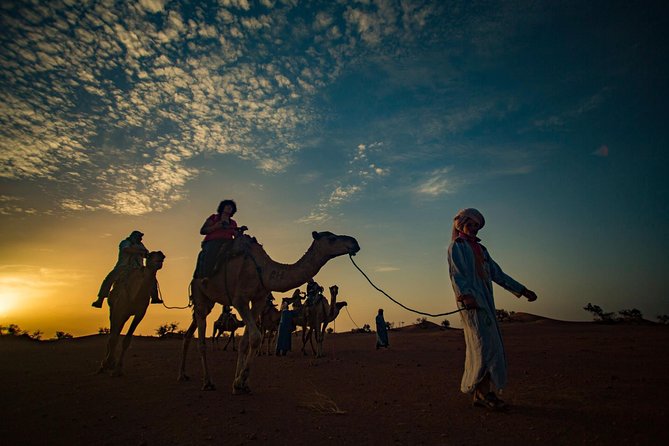 Delve deep into the High Atlas mountains and discover the best of rural Morocco on this 2-day desert tour from Marrakech to Zagora, with a camel trek and overnight at a Bedouin Sahara desert camp included. Take the Tizi-n-Tichka pass through the High Atlas Mountains, where Berber villagers enjoy life at an altogether slower pace. Visit the UNESCO-listed Kasbah At Ben Haddou with your guide and relax at your leisure in Ouarzazate. Trek into the Zagora Desert on camel back and enjoy panoramic views before sitting down to a traditional Moroccan dinner and camping under the stars. Group size is limited to 17 on this tour.

Perfect for those short on time, this 2-day tour takes you from the hustle and bustle of busy Marrakech out through the tranquil Dra Valley, where rural Berber villagers live their lives the way they have for centuries. Explore the UNESCO World Heritage site of At Ben Haddou, enjoy free time in Ouarzazate and discover the delights of the Zagora Desert on a camel trek with your guide.

Day 1: Marrakech – Ouarzazate – Zagora
Following a morning pickup from your accommodation in Marrakech, hop aboard your air-conditioned minivan and head out of the city toward the High Atlas Mountains to begin your tour. Take the Tizi-n-Tichka pass through traditional Berber villages where local shepherds herd their flocks, and enjoy panoramic views of Morocco’s open countryside.

Stop for refreshments at a local cafe (own expense) before heading on to the UNESCO World Heritage site of Kasbah Aït Ben Haddou, a famous film production location. Enjoy free time to visit the site, or hire a local guide (own expense) to explore in greater detail.

Just after midday, continue on to Ouarzazate for lunch at your leisure (own expense). Perhaps visit Taourirte Kasbah, where people from the Atlas, Drâa and Dadès Valleys have traded and socialized for centuries.

In the early afternoon, continue on through the Anti Atlas Mountains to the oasis of Agdz and enjoy time to relax, then carry on past the palm trees and Berber villages of the Drâa Valley to Zagora. On arrival, meet your camel caravan and set off on your camel trekking adventure deep into the Zagora Desert.

Enjoy beautiful views of the setting sun on route to your desert camp, then enjoy a traditional Moroccan dinner under the stars as locals play traditional folk songs for your entertainment.

Overnight: Accommodation at a private tent in a Bedouin desert camp with showers and bathroom ( outside your tent ).

Day 2: Zagora – Ouarzazate – Marrakech
Take an early stroll and enjoy beautiful views of the desert sunrise (optional) then, following breakfast at the camp, ride your camel back to Zagora and meet your driver to begin your return journey to Marrakech.

Stop on route for refreshment in Agdz (own expense) and relax at your leisure, then continue on to Ouarzazate for lunch (own expense) and more free time. Visit Taourirte Kasbah (if you weren't able to the previous day) and soak up the atmosphere in this ancient Moroccan meeting place.

In the afternoon, hop back aboard your vehicle for the final journey across the High Atlas Mountains and arrive back at your Marrakech hotel in the evening.

Camel trekking in the Zagora desert

Meals as per itinerary

Not recommended for child under 6 years old

A conservative dress code is recommended in Morocco. Men and women should keep their upper body as well as their knees covered at all times as a sign of respect to the local culture. Wearing shorts is not recommended. It can be cold at night and in the winter so please bring appropriate clothing

Please note: due to the long distances, approximately 8 hours will be spent driving each day