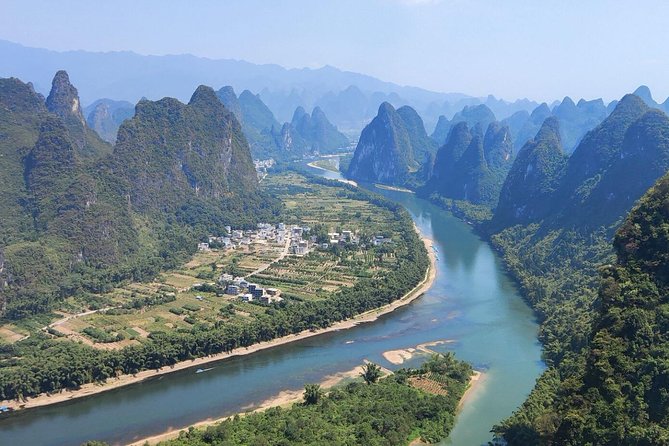 Visit highlights of Guilin and Yangshuo including Guilin to Yangshuo 4 star Li-River cruise boat and Yangshuo Xianggong hill and Liusanjie show and Guilin Reed Flute cave and Elephant hill and Daxu old town with this private Guilin 2 days tour.
You will be picked up and dropped off from your Guilin/Yangshuo hotel and dropped off at the Guilin/Yangshuo hotel/airport/train station.

Itinerary
Day 1: 4 star boat to Yangshuo & Xianggong hill & Liusanjie show. Stay at Guilin.
Stop At: Li River, East of Guangxi Zhuang China
Take this Li River cruise from Guilin to Yangshuo which is the highlight of any trip to northeastern Guangxi Province. Gorgeous Karst peaks give you a surprise at every bend of the limpid river under the blue sky. Water buffaloes sprawl in the fields, peasants reap rice paddies, and school kids and fishermen float by on bamboo rafts. With its breathtaking scenery, life on the river is a taste of a life far from the bustling metropolis.
Your day will begin with a pickup at 7:40AM in the morning from your hotel in Guilin or Yangshuo. From here, you will travel to Zhujiang pier, where you will board the cruise boat. The cruise lasts approximately 4 hours (from 9:30am to 13:30pm). During this time you will enjoy stunning scenery of the Li River.
Duration: 4 hours
Pass By: Xingping Town, Guilin 541906 China
The painting of the Yellow Cloth Shoal hanging on the wall of China's embassy to the UN headquarters is drawn from Xingping Ancient Town. The pattern on the back of a 20 yuan note is also drawn from Xingping Ancient Town, and the fishing village visited by Sun Yat-sen, the first president of the Republic of China, and Bill Clinton, the former US president, is located in Xingping Ancient Town.
Stop At: West Street, East Side of Li River, Yangshuo County 541900 China
After the river cruise, you will enjoy a stroll through downtown Yangshuo with a roam down to the famous West Street.It is very famous at Yangshuo which is Hundreds of shops with many amazing variety of local crafts, antiques and souvenirs make this a shoppers paradise. Or you can just wander through the many alleyways or along the river, people-watching.
Duration: 30 minutes
Stop At: Xianggong Mountain, Xingping Town, Yangshuo County 541906 China
After the West street, we will transfer to Xianggong hill and need 40 minutes driving.
The Xianggong hill is the most beautiful mountain along the Li River, walk to the top of the mountain, you can enjoy a bird-view of whole Li River.
Duration: 40 minutes
Stop At: Impression Sanjie Liu, No 1, Tianyuan Rd Lijiang Shanshui Theater, Yangshuo County 541999 China
Our guide will meet you at 18:30pm of the Yangshuo west street area then head to the show. The light show lasts for 70 mins(19:30--20:40pm) and we back to the Guilin hotel around 22:30pm(21:00--22:30).
Here is the info of the show:
The show of Impression Liu Sanjie can be regarded as one highlight of Yangshuo It is a night show which youve never seen. This is a virtual scenery performance. The largest difference from other shows is the water & hill scenery theater. It uses the waters of Li River as the stage, 12 hills as background. With the vast sky, it consists of the largest virtual scenery theatre in the world. As it is an outdoor theater and the scenes of show are combined with the natural sightseeing, tourist will find the show different season from season and day from day depending on changeable weather condition.
Duration: 1 hour 10 minutes
Meals included:
Lunch
No accommodation included on this day.
Day 2: Reed Flute Cave & Elephant hill & Daxu. The tour end.
Stop At: Reed Flute Cave (Ludi Yan), 0773-2695075, Guilin 541001 China
Our tour guide and driver will meet your hotel lobby at 9am and first we will visit the Reed Flute Cave.
The Reed Flute Cave is a cave-based scenic spot located in the northwest suburb of Guilin, Guangxi, China, 7 km from the Guilin city center. It is about 240 meters (787ft) deep and 500 meters (1640ft) long. The cave has a great number of various exquisite stalagmites, stalactites, stone pillars and stone curtain, which have been forming since 180 million years ago. So it is also known as "the Palace of Natural Art".
Duration: 1 hour
Stop At: Elephant Trunk Hill (Xiangbishan), Within Xiangbishan Park, Xiangshan District, Guilin 541004 China
After the Reed Flute Cave, we will transfer to the Elephant hill which in the centra of Guilin City, is a hot attraction and landmark of Guilin. Beautiful natural views merged with valuable cultural landscape make it a fascinating place which makes tourists fascinated and longing for.
Duration: 1 hour
Stop At: Daxu Old Town, Daxu Old Street, Guilin China
And then transfer to Daxu old town which is Located approximately 20 kilometers southeast of Guilin, near the bank of the Li River, Daxu is noted for its well preserved ancient buildings, worn bluestone streets and traditional culture.
Though a quaint, off the beaten path village, Daxu offers many interesting sites to be explored. From ancient temples to stone streets to a historic market, Daxu is a paradise for lovers of history and antiquities.
Duration: 1 hour
Stop At: Sun and Moon Pagodas, Shan Lake, Guilin China
Finally we will transfer to the Sun and Moon pagodas area for lunch and of course, after the lunch, we can walking around the pagodas and lakes area before drop off your hotel or the airport/train station.
Duration: 1 hour
Meals included:
Lunch
No accommodation included on this day.