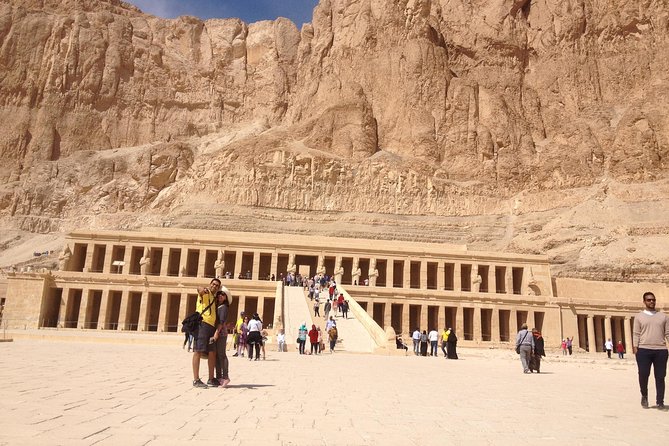 Book your private 2 days tour from a Luxor-egypt">Luxor hotel for your guided sightseeing of Luxor monuments. You will be transported with a private air-conditioned vehicle to the most popular monuments Luxor's West Bank and East Bank have to offer: Valley of the kings, Temple of Queen Hatshepsut, the Colossi of memnon, Karnak Temples and Luxor temple. You will be guided by a qualified Egyptologist tour guide who makes sure all your tour needs are fulfilled.

Day 1
Your friendly guide and driver will pick you up from your hotel lobby in Luxor in the morning. You will be taken to the Necropolis of Thebes, the Valley of the kings on the West Bank of Luxor. This site, which is located in the canyon valley of Mountain Thebes, is home to the royal tombs of famous pharaohs who ruled over ancient Egypt in the period of the 18th to 20th dynasties during the New Kingdom. This ancient burial site is one of the most popular sites for Egypt visitors and is not to be missed. Your tour guide will explain how the tombs were made and tell you about the tradition of ancient Egyptian burial before you visit three tombs. Here you have the option of visiting the tomb of the famous King Tutakhamun and the newly opened tomb of Seti I (additional ticket required).
After visiting the Valley, you will see the amazing and unforgettable facade of the Temple of Queen Hatshepsut (Deir El Bahari). This queen dressed herself as a man to be able to ascend the throne. Therefore Hatshepsut was the only female pharaoh Egypt has known.
After Hatshepsut Temple you will have a look inside an alabaster village, where artisans create wonderful artifacts of local alabaster in the traditional way of the ancient Egyptians.
Then you visit the remaining statues of the Colossi of memnon. These ancient statues are the tallest in all of Egypt.
After finishing your tour you will be dropped off back at your accommodation in Luxor.

Day 2
After breakfast you will be taken to Karnak Temples on the East Bank of Luxor. In ancient times, the complex of Karnak Temples was known as The House of the god Amun-Ra, where this sun-god was worshiped. Most of the kings of the New Kingdom added a construction in honor of Amun-Ra and so Karnak became a complex of 25 temples. At the entrance you will be amazed by the Avenue of Rams, built by King Ramses the Great. Also, you will see the Great Hypostyle Hall (famous set for many movie scenes, such as the James Bond classic The Spy Who Loved Me), the Obelisk of Thutmosis I and his daughter Queen Hatshepsut, and the Sacred Lake, where priests used its water for purification and mummification.
Last, but not least, you visit Luxor temple. This temple is known for its giant statues of King Ramses the Great, the Avenue of sphinxes that leads all the way from Luxor temple to Karnak Temples, and the Obelisk of Ramses II, of which its 'sister' obelisk stands in Paris nowadays. Inside the temple you can also see the 19th-century mosque of Shaykh Abu Al-Haggag, which was built on the courtyard of Luxor Temple above ruins of earlier Christian churches, making Luxor Temple a unique place where worship has remained for many centuries.
After finishing your tour you will be dropped off back at your accommodation in Luxor.