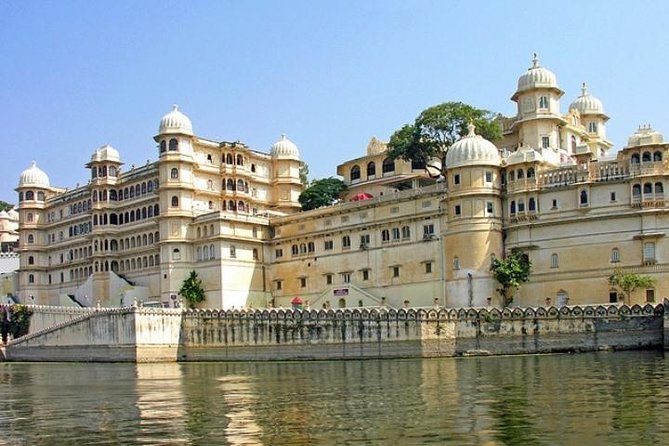 Book this tour in Udaipur to visit some of the most popular attractions including City Palace, Jagdish Ji Temple, Bharatiya lok kala mandal, Saheliyon-ki-Bari, Fatehsagar Lake, and Sajjan Niwas Garden.Kumbhalgarh Fort, a UNESCO World Heritage Site. Learn the history of the fort while enjoying its mesmerizing view. Also visit the Jain Temple in Ranakpur that took 65 years of careful construction for its complex structure.

You will be picked up in the morning at Udaipur Airport , Udaipur Junction Railway Station, bus station, or your centrally located hotel in Udaipur by your friendly English-speaking driver and leave for Udaipur city Palace.

Udaipur city Palace is the largest palace complex in Rajasthan. Maharana Udai Singh stated building this palace in 1559 and it was completed in 18th century by his successors.
Later stop by Shree Jagdish temple, a world renowned temple of Lord Vishnu. This three stories and 79 feet high temple was built by Maharana Jagat Singhji in 1651 and costed 1.5 million rupees. It is owned and managed by the royal family of Udaipur. In the complex the main

Next stop is Dudh talai located on the banks of Lake pichola near the City Palace. Here you can enjoy the beautiful view of the Lake Pichola, Jagmandir Island Palace, Lake palace, Udaivilas, The Leela Palace, gorgeous Aravalli ranges and Udiapur old city. You can either walk around the lake to see various species of birds, relax in the lush green garden, or enjoy the musical fountains in the park. Also stop by Saheliyon ki bari,Moti Magari and Sukhadiya Circle. When the tour concludes, you will be dropped off at Your Hotel Where You Booked
Overnight Stay At Udaipur Hotel

Day(2) Udaipur To Kumbhalgarh Fort To Ranakpur To Udaipur

After Brakfast Leave For Day Tour Of Kumbhalgarh Fort & Ranakpur Jain The drive takes about 2 hours (depending on traffic) before arriving atKumbhalgarh Fort, a UNESCO World Heritage Site. Learn the history of the fort while enjoying its mesmerizing view. Commonly referred to as the"the great wall of India," it features the second largest wall in the world. Afterwards, visit the Jain Temple in Ranakpur. It is believed that the temple was built in the 15th century under the direction of Seth Dharna Shah, who was a follower of Jainism. He constructed the temple with the help of Rana Kumbha, the king of Mewar whose condition for help was that the temple be named after him. There are four entrances to reach the main chamber where the idol of Adinath is placed. There are also five pillars in the temple and each holds idols of various Tirthankaras. The biggest pillar that stands in the center holds an idol of Adinath. After exploring the temple, you will head back to Udaipur and will be dropped back off to your hotel.

English Speaking Guide (This Option Available When you Booked This Option )