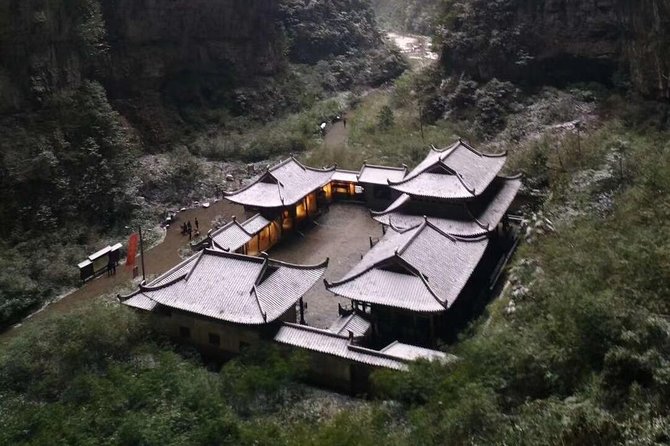 Visit highlights of Chongqing Wulong Karst National Geology Park including Wulong Furong Cave, Impression Wulong night show,Three Natural Bridges and Longshuixia Fissure Gorge with this private Wulong 2 days tour. You will be picked up and dropped off from your Chongqing hotel/airport/train station.

Itinerary
Day 1: Chongqing--Wulong, 3hrs driving, 186KM. Stay at Wulong.
Stop At: Wulong Furong Cave, Furong Road, Guangkou Town, Wulong County 408500 China
Your Chongqing tour starts from the hotel or airport this morning. Your guide will take you to Wulong, a beautiful county about 186 km away from the main city of Chongqing. Enjoy the mountain and river en route. After 3 hours driving you will arrive at Wulong. You will visit the Furong Karst cave at first.
The cave is located along the bank of Furong River; it was discovered in May 1993 and it is very popular among visitors for its limestone cave. It is an underground artistic palace and a cavern scientific museum, and the only nominated site for World Natural Heritage in China so far. The main limestone is unexpectedly as long as 2,700 meters.
And drive to Xiannv town in the late afternoon for the night. In the evening, you can watch the famous show of Wulong Impression, which will tell you about the life of Chongqing people, and the moving history of Yangtze and Three Gorges Dam.
Duration: 1 hour
No meals included on this day.
No accommodation included on this day.
Day 2: Wulong--Chongqing, 3hrs driving, 186KM. Stay at Chongqing.
Stop At: Wulong Karst geological park, Furong River Bank, Jiangkou Town, Wulong County 408506 China
Wulong Karst National Geology Park, an important part of South China Karst, is situated at the lower reaches of the Wujiang River in southeast Chongqing. It was named as a world natural heritage by UNESCO in 2007. Wulong Karst features spectacular karst landscapes, including the three main parts of Furong Cave, Three Natural Bridges, Houping Giant Doline (Houping Tiankeng) and other scenic spots.
Today your Wulong tour will begin from the huge Sink Hole. It is a huge sink hole under the ground as large as a soccer field . And you will walk down to the bottom, and then exit from the beautiful valley. And then your guide will take you to the Great Crack of the earth. It might be caused by some earthquake, or some geological movement. It is about 1000 meters deep under the earth, and 2 kilometers in length . so Its a good place for hiking !
Duration: 2 hours
Stop At: Wulong Tiankeng Three Bridges, Junction of Baiguo Town and Hetao Town, Wulong County 408500 China
When we purchase main entrance tickets and take a shuttle bus to the park and we will visit Natural Three Bridges first, it is the rare geological wonders ecotype tourism area, the typical Karst landform. They are all natural bridges lying from north to south, crossing over the Yangshuihe Gorge and connecting the mountains at the two sides. It is also the Asia's largest natural bridge group. Some scenes of "Transformer IV" were taken here.
Duration: 1 hour
Stop At: Chongqing Longshuixia Gap, Xiannvshan Town, Wulong County 408513 China
And then we will visit Longshuixia Fissure Gorge. It is also called Wulong Valley area, it is progeny tens of millions of years ago and the formation is typical of Karst landscape. The valley is 5 kilometers long, 200-500 meters deep. Primitive forests, waterfalls, springs and gorges; here you can actually feel the Earth is older than a city and more powerful than a rocket. After that, transfer back to Chongqing. End of service!
Duration: 1 hour
No meals included on this day.
No accommodation included on this day.