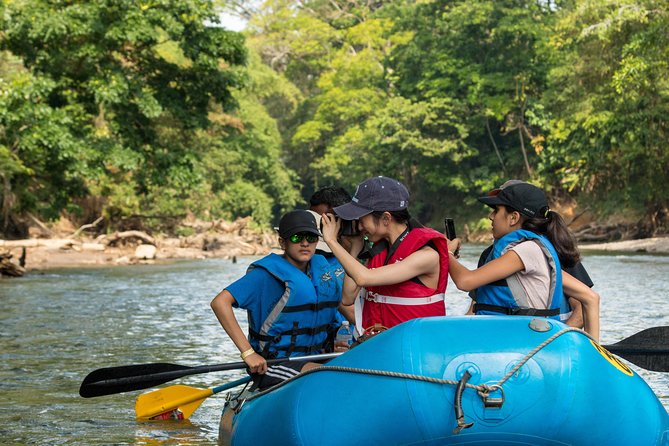 There is no tour better than this combination that takes you deep in the rainforest where you can see many wildlife, colorful birds, monkeys, sloths and many more in a fantastic way, first on a raft down a secluded part of the river and later to the great waterfall to enjoy the fresh, natural fall.
Our guides are local experts, certified that know where to search for the best experience that you will have while in the country!

If you have limited time or simply you dont want a full day tour; this one is specially designed for those who love exploring the beauties of the rain forest.

The tour starts around 7:30am when you are picked up at your hotel in the La fortuna area and taken to one of the most important reserves in the area. Your first activity is the Arenal Safari Float Tour where you will given all the proper safet gear, safety instructions, and then board a raft with your knowledge guide. Next you will take a hike on the trails throughout the heart of the rainforest which is combined with a tree top walk among the suspension bridges. Walking through the canopy of the trees will allow you to see most of its biodiversity, flora and fauna in the rainforest. Enjoy some tropical fruit snack that is served at the end of your exciting hike.

You will continue an exciting journey to La fortuna waterfall, one of the most beautiful scenes on Arenal area and is perfect for those who love swimming and get in touch with nature. Clear water surrounded by lush rainforest will create unforgettable sceneries in your mind.

After this busy morning its time to eat. At 1:30pm you will enjoy a tasty typical lunch served in an open air area handled by a Costa Rican family. Homemade coffee is served at the end of the meal.

You've had a special morning so its time to bring you back to the hotel to relax and enjoy the rest of your day.

It is recommended you bring: Tennis or hiking shoes a bottle of water, raincoat, comfortable clothes, repellent, swimming suit and camera. The tour ends at approximately 2:30pm when you dropped off at your hotel.

Hotel pickup and drop-off only from La Fortuna area

Hotel pick up and drop off outside La Fortuna

Please advise any specific dietary requirements at time of bookin; Use "Special Requirements" field upon checkout to advise information

It is recommended you bring: Tennis or hiking shoes a bottle of water, raincoat, comfortable clothes, repellent, swimming suit and camera

Not recommended for travelers with knee problems