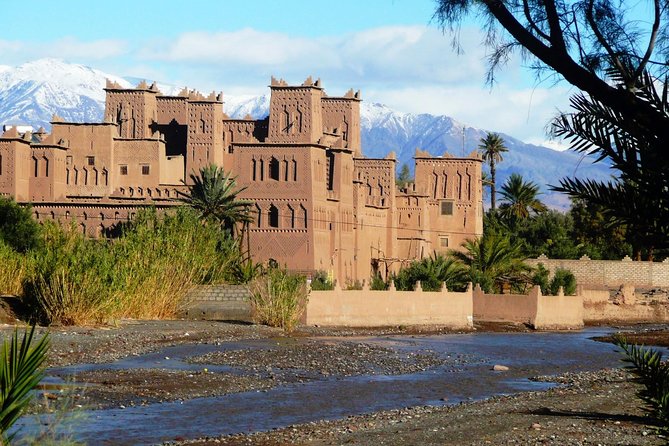 Leave the bustling medinas and souks behind and discover an altogether slower pace of life on this 3-day desert tour to Merzouga and Erg Chebbi from Marrakech. Take the Tizi-n-Tichka pass through the High Atlas mountains and visit the UNESCO-listed At Benhaddou kasbah with your guide. Discover a lush oasis of palm trees at Skoura and travel along the Dads River. Visit Rissani, the ancient capital of the Tafilalt region. Meet your camel caravan in Merzouga and enjoy an evening under the stars in the Sahara Desert. Group size is limited to 17 on this tour.

Travel from Marrakech through the lush greenery of the Haouz Planes to the High Atlas mountains, and through fertile valleys and a desert oasis. Explore rocky gorges and admire spectacular sunsets among the sand dunes in the Sahara Desert.

Please note:
There are two different accommodation options for this tour:
Standard accommodation: You will stay in a standard en-suite room at Hotella Kasbah de Dades (or similar) with air-conditioning not being guaranteed. The desert camp will be in a comfortable private tent with camp beds and basic washing/toilet facilities (shower).

Deluxe accommodation: You will stay in an en-suite room, Western standard bathrooms and air-conditioning at hotella Kasbah de Dades (or similar). In the desert, a luxurytent with a bed and Western-standard bathroom facilities (hot shower).

After the ride back to the lodge (3rd day), you will have the opportunity to take a shower and freshen up at a private room in the hotel.

Day 1: Marrakech – Ouarzazate – Boumalne du Dadès
Following a morning pickup from your accommodation in Marrakech, head deep into the High Atlas Mountains in your air-conditioned minivan to begin your tour. Travel along the Tizi-n-Tichka pass and past rural Berber villages, where local shepherds herd their flocks the way they have for thousands of years.

First, visit the UNESCO World Heritage site of Aït Benhaddou kasbah, where locals and travelers alike have met to socialize and trade down the centuries. Soak up the atmosphere at your leisure, then head onward with your guide to Ouarzazate for lunch in a local cafe (own expense). Perhaps visit Taourirte Kasbah — a popular meeting place for people from the Atlas, Drâa and Dadès Valleys.

In the afternoon, head onward with your guide to the oasis at Skoura. Pause to admire the lush, green palm trees rising like a mirage in the dry desert, then continue on along the Dadès River through deep gorges, where the ruins of ancient kasbahs lie among traditional Berber villages.

Arrive in Boumalne du Dadès in the evening, where your dinner and accommodation await.

Day 2: Boumalne du Dadès – Merzouga – Erg Chebbi
After breakfast at your hotel, hop back aboard your minivan and travel out along the famous ‘Road of 1000 Kasbahs’ to nearby Tinghir. Stroll through the oasis to the mighty Todra Gorge, where a deep crevasse in the orange limestone provides spectacular views, then sit down to lunch at your leisure (own expense) in one of the local cafes.

In the afternoon, visit the holy town of Rissani — birthplace of Morocco’s ruling royal family and the age-old capital of the Tafilalt region. Continue on to Merzouga, a small village sitting on the borders of the Sahara Desert. Meet your camel caravan and, with the sun slowly moving across the afternoon sky, set off toward Erg Chebbi and your camp in the heart of the desert.

With traditional music from local nomads to entertain you, enjoy dinner and an evening under the stars before retiring to bed.

Day 3: Erg Chebbi – Ouarzazate – Marrakech
Following an early-morning stroll before breakfast to enjoy sunrise among the sand dunes (optional), ride your camel back to Merzouga and meet your driver for the start of your return journey to Marrakech.

Stop for lunch in Ouarzazate (own expense), then head onward through the spectacular scenery of the High Atlas Mountains. Arrive back at your Marrakech accommodation in the mid-evening to conclude your tour.

Please note: There are two different accommodation options for this tour:
Standard accommodation: You will stay a standard en-suite room at Hotel du Vieux Chateau du Dades (or similar) with air-condition not being guaranteed; the desert camp will be in a shared tent with camp beds and basic washing/toilet facilities (no shower). Private accommodation is not guaranteed, it might be double, 3-bed or 4-bed room and tent.
Deluxe accommodation: You will stay in an en-suite room Western standard bathrooms and air-condition at Auberge Ait Oudinar (or similar). In the desert, a private tent with a bed is guaranteed and there are Western-standard bathroom facilities (hot shower).

After the ride back to Merzouga on day 3 you will have the opportunity to take a shower and freshen up at a private room in the hotel.

Overnight accommodation at a Sahara desert camp in Erg Chebbi

Not recommended for child under 6 years old

It can be cold at night and in the winter so please bring appropriate clothing.