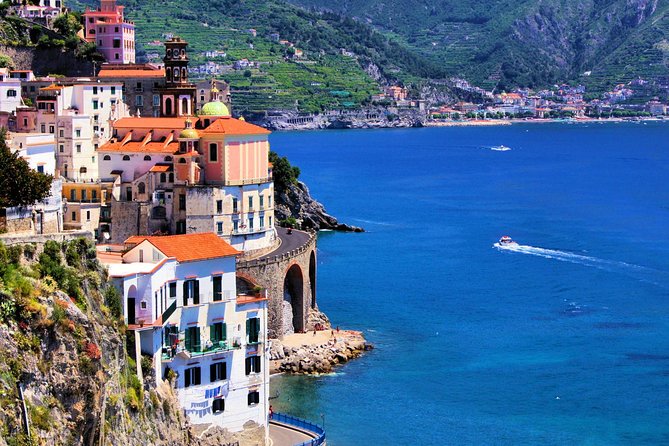 Spend three days exploring Naples, Pompeii, and Amalfi with this 3-Day Italy Trip. You'll visit several UNESCO World Heritage Sites and discover the rich history of Italy. Departing Rome, you'll travel through the Campania region where high-end hotels and historical sites await you. These places also come with Italian comfort food, from pizza and spaghetti to delicious mozzarella cheese. With comfortable accommodation facility, a professional guide and scrumptious meals, your trip to Italy will become very convenient as you take this 3-day tour.

Day 1: Rome-Naples-Pompeii-Amalfi
Stop At: City of Naples, Naples, Province of Naples, Campania
Naples has centuries of history of art and architecture behind it which you get to explore with a professional guide on this tour.

Stop At: Pompeii - Archaeological Area., Pompeii, Province of Naples, Campania
Know about the remains of the ancient city of Pompeii and discover all about its archaeological excavations.
Duration: 2 hours

Day 2: Amalfi
Stop At: Duomo di Sant'Andrea, Amalfi, Amalfi Coast, Province of Salerno, Campania
With a striking natural environment under the steep cliffs on the south-west coast of Italy stands Amalfi which will lure you with its picturesque beauty. Spend an entire day exploring its beauty while on this 3-Day Italy tour.
Duration: 4 hours

Day 3: Amalfi-Rome
Stop At: Duomo di Sant'Andrea, Amalfi, Amalfi Coast, Province of Salerno, Campania
In the heart of the city, the Cathedral of Sant'Andrea is characterized by a striped Byzantine facade which is worth witnessing on your Amalfi trip.
Duration: 30 minutes

Day 1: Rome, Naples, Pompeii, Amalfi (L, D)
After departing Rome, drive along the "Sun Route" motorway and cross the region of Lazio into Campania. Once in Naples, enjoy a short city tour before continuing to Pompeii where lunch in a restaurant is provided. A UNESCO World Heritage site, Pompeii is one of the must-see attractions of Italy. You will visit the excavations of this world-famous Roman town, destroyed by the eruption of Mt Vesuvius in 79 AD.

Next, it's onto Amalfi for overnight stay.

Day 2: Amalfi (B, D)
Take a full day to enjoy Amalfi's breathtaking coast along its famous promenade. Make your own way up to the Cathedral, with its splendid bell tower overlooking the small town below. In the center of the Piazza del Duomo, catch a glimpse of Fontana del Popolo before walking through the old quarter, lined with its picturesque shops.

Overnight in your hotel.

Day 3: Amalfi, Pompeii, Rome (B)
After breakfast, enjoy another free morning before departing back to Rome via Pompeii.

Transportation in an air-conditioned coach