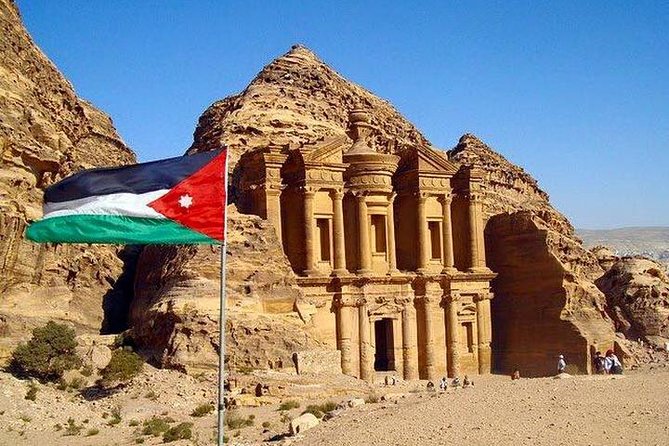 Your 3 Days-2 Nights private Jordan tour lets you discover Petra and the Baptism site, Mt. Nebo and Madaba, with ample time to experience the wonders of each.

Day 1 :  Madaba, St. George Church, Mount nebo, Baptism Site, Petra
We start after breakfast at the hotel to: St. George Church, The St. George's church was built in 6th Century AD and is known for the map that showed all major biblical sites from Lebanon to Egypt. .Some of the finest art of the early Christian centuries can still be seen in Madaba city and its surrounding regions in central Jordan, Church of St George, mosaic map of Jerusalem and the Holy Land, the earliest religious map of the Holy land. Then we drive to Mt Nebo, the place where Prophet Moses gazed at the Promised Land before he died. You visit the old monastery and overlooking the Jordan Valley, Dead sea, Jericho and Jerusalem.
Next we visit the fascinating site of Bethany on the Jordan River, the place where Jesus was baptized by John the Baptist, Where Elijah & Elisha crossed the Jordan as well as the area where the children of Israel led by Joshua entered the Promised Land.
Then we drive to Petra for Overnight
Day 2: Petra full day visit
You will start your visit to Petra; the city carved into the rose-red Mountains by the Nabateans and lost to Civilization until re-discovered by the Swiss Burkhardt. Walk through the Siq, a narrow and winding fissure between the cliffs, to reach the Treasury, the Nabatean Theater, the royal tombs, the Roman Road, the great temple, the temple of the Winged Lion and the basin. During the time of Jesus and the Apostles, one of the East Mediterraneans greatest trading centers was located in the southern Jordan city of Petra, the extensive rock-cut capital of the Nabataean Kingdom. During the Exodus, Moses and the Israelites passed through the Petra area in Edom, local tradition says that the spring at Wadi Musa (Valley of Moses), just outside Petra, is the place where Moses struck the rock and brought forth water. The Bible says that Moses was not allowed to enter the Holy Land but could only glimpse it from Mt Nebo because he struck the rock with his rod to bring forth water, instead of speaking to it, as God had commanded. Aaron, the brother of Moses and Miriam, who was called by  God to be Moses prophet, died in Jordan and was buried in  Petra at Mount Hor, now called Jabal Harun in Arabic (Mount  Aaron). A Byzantine church and later an Islamic shrine/tomb of Aaron were built on the summit of the mountain, which today attracts pilgrims from all over the world. Aaron was the first High Priest of the Bible and is remembered for the beautiful blessing that God commanded him to give people
Day 3: Petra Departure Or Amman
Check out of your hotel at a time dependent on your flight schedule. Then, relax on your journey back towards Amman Airport or Hotel