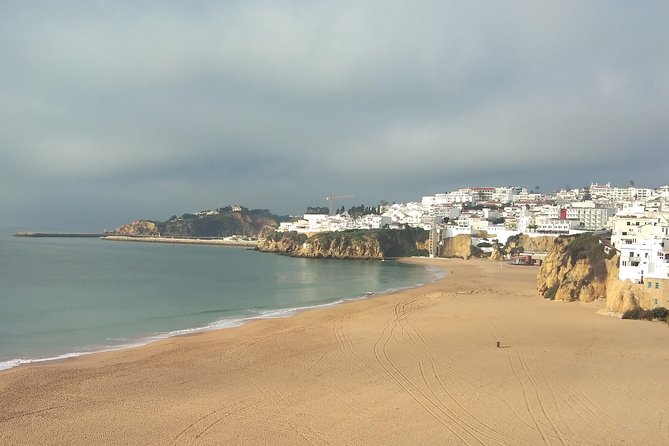 Our 3 days and 2 nights tour in the Algarve,

This is a tourist package that was created for tourists who are passing through our country and I have the desire to know a little of the gastronomy, and culture of the region, also having the opportunity to visit some of the most beautiful beaches and landscapes of the world

The service provided in this tourist package, consists of the collection of customers, at the train station to the airport in the Algarve region,

We collect our guests to the hotel, which is included, the next day we take a tour of the region, visiting historic places.

In this tour package, meals are not included,

Next day will be the day to explore the city of Albufeira, our guides give the indications to our clients so that they can enjoy the city in full.

A further night at the hotel is included.

On the third day we make the return transfer of our guests to the airport, or train station in the Algarve region.

Itinerary
Day 1: Arrival at Gale Beach
Stop At: Praia Gale, Estrada da Gale, Gale, Albufeira 8200-385 Portugal
Praia da Gal
the eastern end of the wide sandy bay of Armao de Pera.
On this beach the rock formations characteristic of the western Algarve emerge again from the sands, providing nooks and shelters for bathers,
A very welcoming beach, with three magnificent restaurants, where you could enjoy seafood and fresh fish from the region,
No meals included on this day.
Accommodation included: Apartamentos Solar Veiguinha
Day 2: Algarve Tour
Stop At: Praia Sao Rafael, Urbanizacao de Sao Rafael, Albufeira 8200-613 Portugal
This small beach has fine gold sand and crystal clear water and is backed by golden limestone cliffs. On the beach itself there are many limestone rock formations[6] which have been eroded over a long period of time to form interesting formations and shapes many of which have names such as Ninho das Andorinhas
Duration: 30 minutes
Stop At: Praia da Marinha, Caramujeira Portugal
Praia da Marinha is one of the most beautiful and emblematic beaches in Portugal,
considered one of the 10 most beautiful beaches in Europe and one of the 100 most beautiful beaches in the world by the Michelin Guide
It was even awarded the "Praia Dourada" award by the Ministry of Environment in 1998 for its unique natural values.
In addition to this honorable distinction, it has also become the promotional image of 'Guia de Portugal' distributed worldwide
Praia da Marinha has been widely used by international advertising agencies and television stations to record advertisements.
Duration: 30 minutes
Stop At: Lagos, Lagos, Faro District, Algarve
Lagos is a town in the Algarve region in southern Portugal. It is known for its walled old town, cliffs and Atlantic beaches.
One of the most beautiful and relaxed cities in the Algarve.
St. Anthony's Church, an ornate 18th-century church, is opposite the Governors' Castle, a castle with a baroque facade and towers
Duration: 1 hour
Stop At: Ponta da Piedade Lighthouse, Lagos Portugal
The Ponta da Piedade Lighthouse is a Portuguese lighthouse located in Ponta da Piedade, Santa Maria parish, Lagos, Algarve.
It is a yellow square brick tower with attached building. It has red flashlight.
It was erected between 1912 and 1913 on the site of the ruins of the Nossa Senhora da Piedade chapel, entering service this past year with a fourth-order optical device that emitted five lightning bolts clustered every ten seconds from the top of a five-meter tower. , at 51 meters altitude.
The light source was an oil lamp. In December 1923, the light becomes concealed, with a 2.5 second concealment every 69.5 seconds.
In 1952, the lighthouse was electrified with utility power, and the oil lamp was replaced with an electric lamp with an original range of 15 nautical miles, later increased to 18 nautical miles.
Four years later, a new electric filament device is installed. It was automated in 1983
Duration: 30 minutes
Stop At: Fortaleza de Sagres, 8650-360, Sagres Portugal
The Sagres Fortress, also referred to as Sagres Castle or Sagres Fort, is located in a dominant position crowning Ponta de Sagres, in the southwest of the Algarve, in Portugal.
From its steep cliff, constantly beaten by the wind, the visitor enjoys a stunning panoramic view along the coast, with emphasis on the Sagres coves,
the Cape of So Vicente (extreme southwest of the European continent) and the immensity of the Atlantic Ocean.
Duration: 1 hour
Stop At: Farol do Cabo de Sao Vicente, En 268, Sagres 8650-370 Portugal
Cabo de So Vicente is a cable located in the extreme southwest of mainland Portugal, in the parish of Sagres
Duration: 30 minutes
No meals included on this day.
Accommodation included: Apartamentos solar veiguinha
Day 3: Silves Castel & Olld Town Albufeira
Stop At: Castelo de Silves, Rua do Castelo, Silves 8300-144 Portugal
In a dominant position over the mouth of the Arade River, which is the border of the coast, it is the largest castle in the Algarve region.
being considered as the most beautiful example of Islamic military architecture in the country.
The earliest human occupation of Silves Hill dates back to prehistory, and it is believed that in the first millennium BC Phoenician navigators penetrated the Arade River,
navigable until the end of the Middle Ages, and who later became acquainted with the Roman presence, which here explored a copper mine, according to archaeological evidence.
Some authors claim that these were responsible for a first fortification, between the fourth and fifth centuries, also attributed to the succeeding Visigoths.
Duration: 2 hours
Stop At: Centro Historico de Albufeira, Old Town, Albufeira 8200-110 Portugal
Albufeira is a seaside town in the Algarve region, which is in southern Portugal. The former fishing village has become a popular holiday destination with beaches and a bustling nightlife area.
Local fishermen now use the modern marina, which is also a base for diving, dolphin watching and boating. It is surrounded by colorful residential buildings with a boardwalk by the sea.
Duration: 3 hours
Stop At: Albufeira Marina, Sitio da Orada, Albufeira 8200-394 Portugal
The water mirror of Albufeira Marina is the best business card for a relaxing holiday, in a quiet location, 1 km from the beach and the entertainment of one of the most famous tourist resorts in the Algarve, internationally recognized.
Duration: 1 hour
No meals included on this day.
No accommodation included on this day.