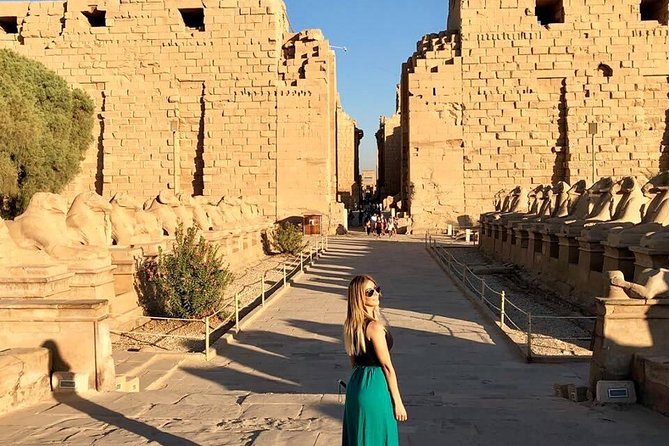 pick up from your hotel in Luxor or Nile cruise
one day tour to kanrak , Luxor temple
second day west Luxor
third day to Dendera and abysod temple

first day :east bankLuxor Temple. It was built by Amunhotep III in 18th Dynasty in the New Kingdom and it was completed by Ramesses II during the 19th Dynasty. It was dedicated to the great god Amun-Ra, his wife Mut and their son Khonsu thenKarnak temple is the greatest example of worship in history and was dedicated to the God Amon, his wife Mut and their son Khonsu. It was constructed from the beginning of the Middle Kingdom to the Graeco Roman Kingdom

second day :visit the necropolis of the ancient city of Thebes. Arriving at the Valley of the kings, burial place of the kings of Thebes (ancient Luxor) The most known tombs are King Tutmosis I, Tutmosis III, Tut-Ankh-Amon, King Ramssess VI, King Mrenptah and AmonhotepII. Then Continue to .the Temple of Hatshepsut, one of the most striking monuments in Egypt. the famous female ruler of Egypt for 20 years then colossal staute then backto hotel

third day: trip to dendera and abydos temples
The temple was built by King Seti I, and completed by King Ramsess II, known as Temple of seti i.The Temple of Hathor at Dendera, on the Nile north of Luxor, is one of the latest Egyptian temples. Dedicated to the wife of the god Horus
then back to hotel .