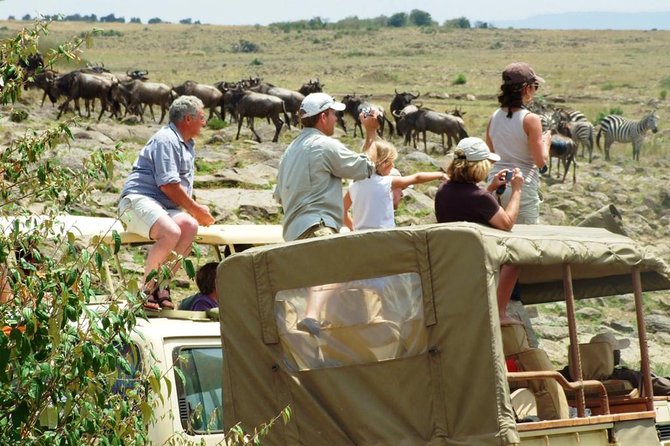 The Masai Mara is Kenya's finest and most outstanding wildlife sanctuary where gentle rolling grassland ensures animals are never out of sight. The climate is gentle, rarely too hot and well spread rainfall year round. The sensation of the great wildebeest migration between July and October is unparalleled.

The Masai Mara is Kenya's finest and most outstanding wildlife sanctuary where gentle rolling grassland ensures animals are never out of sight. The climate is gentle, rarely too hot and well spread rainfall year round. The sensation of the great wildebeest migration between July and October is unparalleled. The wildlife is far from being confined within the Reserve boundaries and an even larger area extends beyond the game Reserve. Centuries of close association with the wildlife has resulted in an almost symbiotic relationship where wildlife and Masai people live in peace with one another.The first sight of this Game Park is breathtaking. There is nowhere else on earth to compare with this wildlife marvel. The combination of a gentle climate, scenic splendor and untold numbers of wildlife makes the Masai Mara National Reserve Kenya's most popular inland destination. We have several choices of the leading tented camps in the Mara for the experience of sleeping under canvas but in luxurious conditions!

This morning we pick up clients from their hotel and we depart from Nairobi at 8.30 am and drive through the view point of the Great Rift Valley to the Masai Mara National Reserve. This enormous reserve is actually part of the vast Serengeti plains famously known for its spectacular great wildebeests migration and is home of the Big Five: Lion, Elephant, Leopard, Buffalo and Rhino. Lunch at the Lodge/camp and relax before departing for the afternoon game drive. The Mara Game Reserve one of the greatest wildernesses of the world. Large mammals are varied, and easy to see. The wild animals found in the Park's are: Masai Giraffe, Buffalo, Eland and thousands of plain game including Impala, Zebra, both Thomson's and grants Gazelles.

Full day spent for viewing the great predators and explore the parks amazingly high concentration of wild animals. On the plains are enormous herds of grazing animals plus the elusive Cheetah and leopard hiding a midst acacia boughs. During the stay we also have an optional opportunity to visit a village of the Masai people to witness the singing and dancing that are part of their daily lives and sacred rituals. A glimpse into their homes and social structure is a poignant experience. Dinner and overnight at the lodge/camp

Early morning game drives in Masai Mara followed by late breakfast at the campsite then depart for Nairobi by road. The safari ends in Nairobi late in the afternoon

Park fess $80 per day per person